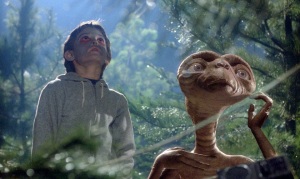 It’s finally the summer movie season, and that means it’s time for some massive summer blockbusters! However, if Jurassic World Dominion or Thor: Love and Thunder are not your cup of tea, then Universal has you covered. The famous studio has announced that two of director Steven Spielberg’s best films, E.T. The Extra-Terrestrial and Jaws, are coming back to the big screen very soon. The best part is, the two original summer blockbusters will be presented in IMAX for the first time. E.T. will be released exclusively on IMAX screens beginning August 12 to celebrate the film’s 40th anniversary, while Jaws will be released on IMAX screens, as well as RealD 3D, beginning on September 2.When expressing their excitement for the upcoming rerelease president of domestic theatrical distribution for Universal Pictures Jim Orr, said, “Universal is honored to have been a part of so many extraordinary, unforgettable Steven Spielberg films over the past 47 years, including Jaws in 1975, E.T. in 1982 and Jurassic Park in 1993.” He continued on, saying:

“No filmmaker, it’s fair to say, has had a greater or more enduring impact on American cinema or has created more indelible cinematic memories for tens of billions of people worldwide. We couldn’t think of a more perfect way to celebrate the anniversary of E.T. and the first Universal-Spielberg summer blockbuster, Jaws, than to allow audiences to experience these films in a way they’ve never been able to before.”

President of IMAX Entertainment, Megan Colligan, reiterated that same sentiment, saying, “IMAX is thrilled to partner with Universal Pictures and Amblin Entertainment to offer audiences the opportunity to experience these two iconic films in IMAX for the very first time.” Colligan finished by stating, “Steven Spielberg redefined modern cinema and ushered in a new era of bold, swing-for-the-fences filmmaking, and the IMAX Experience has expanded around the world because of the trail blazed by films like E.T. and Jaws.” Finally, CEO and President of Cinema, RealD Travis Reid, added,“Jaws redefined what it means to be a summer-event blockbuster and now for the first time ever audiences can experience Steven Spielberg’s motion picture classic in 3D.” Reid finished off talking about the exciting news saying, “Everything that made Jaws a sensation and a fan favorite for nearly 50 years will be enhanced in RealD 3D, allowing fans a completely new opportunity to immerse themselves in one of the greatest summer suspense thrillers of all time.”

When we look at any successful modern blockbuster, regardless if it was released in the summer or not, it has Jaws to thank for all the money it’s making. When that sun-soaked horror classic was released in June 1975, it not only changed the way audiences viewed the cinematic experience, it changed the way films were made forever. Jaws still holds up today because of its wonderfully tense sequences of suspenseful terror, John Williams’ iconic musical score, and its masterful animatronics work. It made Spielberg a household name, paving the way for him to make other bona fide classics like Raiders of the Lost Ark, Jurassic Park, and E.T. Jaws went on to be the highest grossing film of 1975, and it was nominated for Best Picture. The film won three Oscars that year, including Best Musical Score for Williams’ brilliant work. However, Jaws and elements like its classic poster, is burnt into our modern pop culture in the same way that Star Wars or Jurassic Park are. Its lasting legacy has taken a shark size bite out of most film fans’ hearts.

Then there is E.T. which was its own kind of animal. When the film was released in the summer of 1982, E.T. redefined the coming-of-age story. Every time there is a new film involving a kid and some kind of creature, it’s instantly compared to this classic family adventure. Like how Jaws changed the game for the horror genre, E.T. redefined what a family friendly film could be. The epic scope, the classic Williams soundtrack, and iconic cinematic moments made this film unique even in today’s market. E.T. was simply a magical yet emotionally mature story on top of it being the highest grossing film of 1982. The film was even nominated for nine Oscars, including Best Picture, and it won four of them.

Jaws and E.T. are cinematic juggernauts that need to be seen in theaters. That’s why it’s great that Universal is giving old and new fans a chance to see these genre defining classics on the big screen in the best format possible. E.T. will be coming to IMAX on August 12 while Jaws will be swimming to IMAX and RealD 3D on September 2. Spielberg fans won’t have to wait long to see the first glimpse of E.T. in IMAX as a new trailer promoting the re-release will be attached to Jurassic World Dominion. That new summer blockbuster roars into theaters this weekend.