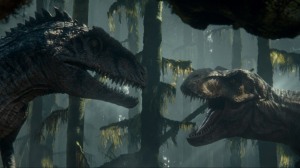 Jurassic World Dominion isn’t going extinct at the box office. The Universal/Amblin sequel saw its Saturday business jump to $46.7M compared to Friday’s actual gross less $18M previews of $41.7M, a 12% climb. This puts the Colin Trevorrow-directed, written and executive produced movie on a course for a $143.37M opening, off 3% from the last film, Fallen Kingdom.

Box office analytics corp EntTelligence says 10.8M moviegoers saw Dominion this weekend, which is the fourth-best admissions for a major studio movie’s opening weekend during the pandemic after Spider-Man: No Way Home (20.6M), Doctor Strange in the Multiverse of Madness (14M) and Top Gun: Maverick (11.6M).

As previously mentioned, Dominion has posted the best stateside debut for a non-superhero movie during the pandemic, ahead of the $126.7M 3-day previously posted by Paramount’s Top Gun: Maverick, which held up tremendously against the dinos in its third weekend with $50M, -44%, and a running total of $393.3M. Even more impressive about that hold: Universal took all of Top Gun 2‘s Imax and premium format screens this weekend.

The worldwide weekend for Dominion is $319M, for a global running total of $389M, which includes offshore holdovers.

Seriously, that’s an amazing result. I thought that the bad reviews and prickly PostTrak exits would collapse Dominion‘s domestic opening far below the $125M that the studio was projecting, but clearly there’s a great enthusiasm here for the brand. Says one rival studio executive this morning, “Never underestimate the power of dinosaurs.” That and Universal’s marketing machine across all Comcast tentacles (named NBCUniversal’s Symphony program which includes movie promotions across all sectors including theme parks, Xfinity cable, networks, etc) .

One industry source argued to me over the weekend that Uni didn’t do enough to promote this movie; that there should’ve been more dinosaurs everywhere outside on billboards and buses. I disagreed. I think Uni was widespread with this Jurassic for a long time, and had the movie faltered this weekend, then that was due to poor word-of-mouth, given how critically this is the worst of the bunch. That didn’t happen. We’ll see what next weekend brings, but the last movie, which was perceived as a low point in the series, reception-wise, from the 2015 film, saw a 60% decline in weekend 2, and a 2.8x leg out factor from its opening to a final domestic of $417.7M.

Exclaimed Universal Domestic Distribution Boss this AM, “This incredible debut for Jurassic World Dominion is driven by not only the loyal fans of the original Jurassic trilogy beginning in 1993, but many new fans experiencing Jurassic for the first time as our casts united for an epic conclusion.  After a long journey from being the first Hollywood film to safely return to production during COVID, up through our global release dates, we’re thrilled for our filmmakers and talent who worked tirelessly on this movie, and for our great partners in exhibition benefiting from a tremendous start to their summer.”

In firing up the campaign for Dominion, the studio had access to one of the biggest launchpads in NBC’s broadcast of the Winter Olympics, where they debuted a two-minute spot featuring gold medalist Nathan Chen, 2x gold medalist Mikaela Shiffrin and retiring 3x gold medalist Shaun White running into the dinosaurs in the wild. A very clever cross promotion.

But what else was a draw here? Having the original Jurassic Park trio Laura Dern, Jeff Goldblum, and Sam Neill altogether in another Jurassic movie after 29 years, is also a huge selling point.

Paramount+ Star Trek architect Alex Kurtzman once told us his rule of thumb for building out the Gene Roddenberry franchise: “Render onto Caesar what is Caesar’s, everybody from the older generation should be incorporated into the new generation, there should always be respect for both, and yet it always has to forge new ground.” One could argue that same adage could apply here to making Jurassic a continual success for generations, or for that matter, any legacy franchise. And it’s what Uni did from the early onset in making Dominion: They tipped their hat to the old fans in having Dern, Goldblum, and Neill return. As we pointed out yesterday, PostTrak exits showed that 43% of all moviegoers bought tickets because the sequel is part of a franchise they love, while 25% cited the cast as a whole.

Dominion skewed more male at 56%, consistent with the previous sequels, with the majority being over 25 at 56% and the 18-34 moviegoing demo showing up at 46%. Dominion, while overperforming in the West Coast and in the South Central region, also overindexed in Latino and Hispanic markets such as Houston, San Antonio, Albuquerque and El Paso.

Imax, PLFs and all enhanced formats drove 35% of the weekend’s ticket sales. Imax’s 400 auditoriums claimed 8% of the gross or $12.3M making it the fourth best domestic debut for a Uni title in Imax. Interesting to note here as we barrel toward Avatar 2 in December that 3D screens repped 13% of Dominion‘s domestic gross. On a global basis, 25% of Dominion‘s ticket sales were earned by 3D theaters or $90M.

Uni spared no expense in getting the U.S./Canada opening to where it needs to be. And while studios tout the power of social media in their marketing, nothing drives people to theaters more like good, old-fashioned TV ads. iSpot, which only shows a portion of what the studio shelled out on ads here, estimates that Universal shelled out $41M –an enormous number by the ad metrics corp’s measures– earning 1.46 billion impressions.

The first Dominion trailer was released across Facebook, Instagram, YouTube, Google and Hulu, followed by a 90-second Superbowl spot earlier this year, introduced by the pic’s star Chris Pratt, which aired during the pre-game. That was the first time fans caught a glimpse of Dern, Goldblum and Neill. The result of these efforts? 265 million views worldwide. The second trailer dropped out of CinemaCon and clocked 200M views worldwide. The second trailer drop was also bolstered by several media activations including a featurette, an NBA co-branded spot and the launch of ticket sales.

Studio reported box office as of Sunday AM: