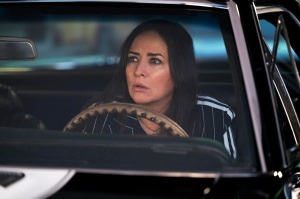 Emmy-winner Pamela Adlon is making her feature film directorial debut with an upcoming comedy, The Hollywood Reporter announced. The script is written by Ilana Glazer who will also star in the film, and co-written by Josh Rabinowitz. The project is currently untitled but will be produced by FilmNation Entertainment and Range Media.

The comedy will star Glazer as Eden, “an aggressively single woman” who winds up pregnant after a one-night stand. In way over her head, Eden relies heavily on her married best friend Dawn, played by Michelle Buteau (Always Be My Maybe) for advice and guidance “through gestation and beyond.” Dawn, the polar opposite of her best friend, is the mother of two and finds herself tasked with coaching Eden through motherhood. In an interview with Parents, Glazer said, “I will just say that it’s a hard comedy about how having babies affects best friends, and it’s going to be so balls funny so that anyone who’s in proximity to this specific experience can relate.”

“As fans of the classic hard comedies we grew up on, and as mothers of young kids, we’re thrilled to be making the movie we’ve been waiting for. This movie will tug at your heartstrings but, only after it makes you pee-laugh in public.”

Though this will be her first feature film to direct, Adlon is no stranger to the director’s chair. She directed a majority of FX‘s comedy-drama Better Things, as well as starred in it with Scream 5‘s Mikey Madison. The show ran for a healthy six seasons before ending in April this year. Other roles include her first as Dolores in Grease 2, Kelly Affinado in The Facts of Life, and her voice-overs for Spinelli in Recess, Phineas and Ferb, and Bobby in King of the Hill, which earned Adlon an Emmy Award. She’s set to lend her voice to Jocelyn Light in Jodie, a Daria spinoff, alongside Tracee Ellis Ross, Zosia Mamet, and Dermot Mulroney.

Emmy-nominee Glazer is best known as a creator and leading role in Comedy Central‘s Broady City with Abbi Jacobson. After five seasons Glazer went on to voice Penny Carson for BoJack Horseman and E.B. for the critically acclaimed streaming series Green Eggs and Ham: The Second Serving on Netflix. Glazer‘s feature film credits include Rough Night with Scarlett Johansson, Kate McKinnon, and Zoe Kravitz and the pregnancy thriller False Positive which she wrote the screenplay for. She’s currently playing Chelsea on the comedy series The Afterparty on Apple TV+ with Tiffany Haddish.

Actress, writer, and stand-up comedian Buteau has had roles in shows like Netflix‘s Russian Doll with Natasha Lyonne and Key and Peele, and recurring roles in First Wives Club, Bless the Harts, and Tales of the City. Her film credits include Hulu‘s Happiest Season, Ali Wong‘s Always Be My Maybe and the ensemble comedy Almost Love. Buteau is currently working on a series for Netflix, Survival of the Thickest, based on her book of essays.

Glazer will produce the project through her Starrpix banner alongside Rabinowitz, and filming begins in July in New York City.