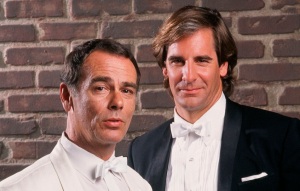 NBC released the official synopsis for the Quantum Leap reboot series, confirming that the new show is a reimagined sequel to the original. Set 30 years after Dr. Sam Beckett (Scott Bakula) stepped into a quantum leap accelerator and vanished from the face of Earth, the reboot series will follow a new team of scientists as they try to uncover the mysteries of the incredible machine.

The original Quantum Leap series follows Dr. Beckett as he leaps through time and space and takes possession of other people across history. At each leap, Dr. Sam helps a new host correct what he sees as historical mistakes, usually making drastic changes in the flow of time. By messing around with History, Dr. Sam believes he’ll be closer to coming back home, which usually backfires and pushes him to a different moment in time.

The new series will introduce a new time traveler named Dr. Ben Song (Raymond Lee), a physicist who uses the quantum leap machine against protocol and start to travel to different periods, always occupying the body of a new person. As the synopsis reveals, the new series will follow not only the physicist’s adventures, but also his former teammates as they try to map Ben’s travels to unlock the secrets of Dr. Sam’s miraculous machine. Ben’s adventures, however, will anger the people in charge of keeping the device safe, led by the no-nonsense military man Herbert “Magic” Williams (Ernie Hudson). Finally, just like in the original series, Ben will also count on a holographic companion through his historical voyage, an Army veteran named Addison (Caitlin Bassett).

The Quantum Leap reboot also stars Mason Alexander Park and Nanrisa Lee. The pilot episode of the new series was directed by Helen Shaver (Station Eleven) from a script penned by La Brea showrunners Steven Lilien and Bryan Wynbrdant. In addition, the creator of the original Quantum Leap, Don Bellisario, signed on to executive produce with Lilien, Wynbrdant, Deborah Pratt, and Martin Gero. Pratt voiced the AI “Ziggy” in the original series.

Quantum Leap will premiere on NBC Monday, September 19. Check out the official synopsis for the Quantum Leap reboot below.

It’s been nearly 30 years since Dr. Sam Beckett stepped into the Quantum Leap accelerator and vanished. Now, a new team, led by physicist Ben Song (Raymond Lee), has been assembled to restart the project in hope of understanding the mysteries behind the machine and the man who created it. Everything changes, however, when Ben makes an unauthorized leap into the past, leaving the team behind to solve the mystery of why he did it. At Ben’s side throughout his leaps is Addison (Caitlin Bassett), who appears in the form of a hologram only Ben can see and hear. She’s a decorated Army veteran who brings level-headed precision to her job.

At the helm of the highly confidential operation is Herbert “Magic” Williams (Ernie Hudson), a no-nonsense career military man who has to answer to his bosses who won’t be happy once they learn about the breach of protocol. The rest of the team at headquarters includes Ian Wright (Mason Alexander Park), who runs the Artificial Intelligence unit “Ziggy,” and Jenn Chou (Nanrisa Lee), who heads up digital security for the project. As Ben leaps from life to life, putting right what once went wrong, it becomes clear that he and the team are on a thrilling journey. However, Addison, Magic, Ian and Jenn know that if they are going to solve the mystery of Ben’s leap and bring him home, they must act fast or lose him forever.