Synopsis – Thor reunites with Valkyrie, Korg and his ex-girlfriend Jane Foster to fight the threat of Gorr, The God Butcher.

My Take – Introduced in 2011 to cinema goers in the fourth film of the Marvel Cinematic Universe (MCU), in his first solo outing, Thor, based on the Norse mythological deity of the same name, was not only just widely accepted, but also plunged its main star, the then relatively unknown Chris Hemsworth, into stardom.

But while the Asgardian prince continued to shine in follow up adventures like The Avengers (2012), Thor: The Dark World (2013) and Avengers: Age of Ultron (2015), it wasn’t until director Taika Waititi came onboard, expanded on the earlier hinted characteristics and turned the growing uninteresting space Viking into one of the MCU’s most popular characters in his feature, Thor: Ragnarok (2017). Traits which Hemsworth doubled up in follow-ups, Avengers: Infinity War (2018) and Avengers: Endgame (2019).

Returning for the fourth solo installment, the New Zealand filmmaker not just brings back Natalie Portman into the fold, following a nine-year absence, but also takes everything that worked the first time around and dials it all the way up. Fitting for a film so heavily inspired and indebted to over-the-top excess of 1980s action films and heavy metal.

And though the film expectedly has a big goofy heart and is lot of fun to watch, it sadly doesn’t stand in comparison to Ragnarok. The 2017 film balanced its humor and emotions deftly, and blended to create a satisfying journey that stood apart from the franchise, but while this follow up is immensely faithful to Waititi’s essence as a director, it suffers from a tonal inconsistency that weighs down moments that should have been instrumental to its plot. Most importantly, it needed to be longer to do justice to it.

Running for just 119 minutes (including those overly long Marvel end credits), the film suffers from narrative gaps and under-utilizes nearly every actor and character at its disposal especially Christian Bale’s Gorr the God Butcher.

Nevertheless, anyone who has every rooted for Thor and Jane’s relationship are going to be very happy and director Waititi’s signature humor and visual style plays an essential part in keeping the film constantly entertaining, even with its faults. And with the ever charming Chris Hemsworth still at the helm, killing it as the enthusiastic God of Thunder, it is safe to say Thor will return. 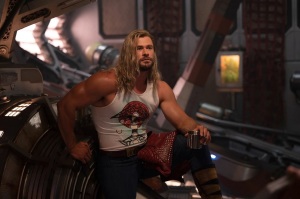 Taking place a few years after the events of Endgame, the story once again follows Thor Odinson (Chris Hemsworth), who is still try to heal from all his loss and has spending time hanging out with the Guardians of the Galaxy – Peter Quill / Star-Lord (Chris Pratt), Mantis (Pom Klementieff), Drax the Destroyer (Dave Bautista), Nebula (Karen Gillan), Groot (voiced by Vin Diesel), Rocket (voiced by Bradley Cooper), and Kraglin Obfonteri (Sean Gunn), assisting, but mostly damaging in their missions.

But when he receives a distress signal from his old mate, Sif (Jaimie Alexander), he and his rock expository friend Korg (Taika Waititi) part ways with the Guardians, along with his two newly gifted giant goats, only to learn that a new villain named Gorr (Christian Bale), who is on a dark one-man mission to slay every living deity with his deadly Necrosword, is heading to New Asgard, which has turned into a tourist hot spot under the rule of King Valkyrie (Tessa Thompson).

Upon arrival, while fending of Gorr’s dark forces, Thor is shocked to find his ex-girlfriend Dr. Jane Foster (Natalie Portman), a gifted astrophysicist, transformed into The Mighty Thor after being deemed worthy by a reformed Mjolnir. Though both have long-since moved on after their breakup, current circumstances are such that the two are forced to put their past behind them and take down Gorr before he completes his war on gods.

Without a doubt, the film contains an infectious energy that moves from one terrifically entertaining sequence to the next, including a late showstopper involving a group of young actors which ranks among the most overwhelmingly gleeful sequences Marvel has committed to the screen. Dealing in themes like love, loss, grief, guilt, self-hatred, and pain, this one is a mid-life crisis film, punctuated by silly humor and endless gags that builds steadily towards an emotional, life-altering adventure for Thor.

Here, director Waititi has created a weird, wild, and wonderful slice of comic book escapism, with the constantly-changing backdrops and visual palettes evoking splash pages and panels ripped right from the Marvel Comics, with the standout a monochrome showdown deep in the Shadow Realm. The film is always visually wowing, from the gold-drenched opulence of Omnipotence City – where Thor finds his idol Zeus (Russell Crowe) to Gorr’s realm where director Waititi turns everything into a black-and-white noir fantasy.

We also understand why Thor and Jane fell in and out of love. While this functions as a convincing retcon to Jane’s abrupt departure from the MCU and Thor’s life, her story is one drenched in pathos, as we soon learn that she is dying. Though their reunion is awkward at first, as the duo is not quite sure how to navigate this new-found dynamic, it becomes endearing when they gradually realize that their feelings for each other are strong enough to eclipse worlds.

However, the best part of the film lies in the trajectory of the Gorr’s backstory, and how he came to be who he is. Wonderfully etched, highlighting the dangerous, solitary path a grieving man chooses to follow after being spit on by the gods, rather unjustifiably, as they are more self-serving. A rather fitting example comes later when we witness Zeus insisting on doing nothing as opposed to stopping Gorr after he abducts several Asgardian children.

Despite being based on harsh themes, director Waititi injects humor constantly, especially surrounding Thor’s relationship with his weapons, with Stormbreaker feeling jealous, acting out, and not okay with how happy Thor is to see Mjolnir. But alas, not even a pair of screeching goats, and an orgy-obsessed Zeus can distract you away from the film’s problems.

The narrative winds up being pulled in at least half a dozen directions at once for two-thirds of the running time, yielding a frequently hilarious, disarmingly charming, and fun-filled superhero romp that teeters right on the brink of self-aware absurdity, but also a massively unfocused one that forces itself to make regular jarring tonal shifts to accomplish a goal as simple to get through its cookie cutter plot. Also admittedly, the film is one of the rare occasions where it could have genuinely benefited from being longer. There’s a lot of cutting, and there are times when you can feel the absence of necessary plot detail.

Several significant story beats, character interactions, and even set pieces feel rushed and abrupt, and while you’d expect them to have been trimmed for pacing reasons, there’s still time for a running joke about relentlessly screaming flying space goats, as well as a fairly lengthy scene featuring Sam Neill, Matt Damon, Melissa McCarthy and Luke Hemsworth’s Asgardian actors. Given the very relatable human health problems Jane faces, this storyline should have been the emotional focus, but the film doesn’t take the time needed for the challenge she faces to sink in for the risk of darkness.

However, Christian Bale suffers most. Bale effectively transcends Gorr from being a rote villain thanks to a deliciously unhinged performance, his screen time is quite less. Bale is so creepy and so committed that you are just left wanting more. Nevertheless Chris Hemsworth continues to excel, putting in quality time on his character work in recent years, giving Thor enough existential crises to make him one of the MCU’s funniest, most relatable personalities. Natalie Portman brings the necessary dramatic chops to sell Jane’s condition, while also gets enough chance to flex her action hero muscles.