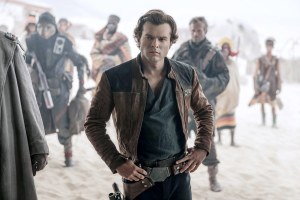 It looks like Solo star Alden Ehrenreich is the latest actor to join the cast for the Marvel series Ironheart, according to Deadline. The series is expected to stream on Disney+ as a part of phase four of the Marvel Cinematic Universe. Filming for the project started in June in Atlanta and is expected to continue through October of this year.

Ehrenreich joins Dominique Thorne in the cast. Thorne will be playing Riri Williams, a genius and inventor who creates a suit of armor that rivals Iron Man’s own invention. The series, which will air in six parts, is based on the Marvel character of the same name. Ironheart was originally created for Marvel Comics in 2016, and made her first appearance in Invincible Iron Man Vol. 2 #7. The character of Riri Williams is vital to phase four of the MCU, filling in the blank space left by Robert Downey Jr‘s Iron Man after his epic self sacrifice in 2019’s Avengers: Endgame.

The absence left by the death of Iron Man has been partially addressed by the 2019 and 2021 Spider-Man films, which showed Tony Stark’s protégé Peter Parker’s struggle to adapt to a world without his billionaire playboy mentor. However, Parker is far from the tech genius that Stark was, and that is where Riri Williams comes in. Like Stark, Williams is a genius, and like Parker, her world has been greatly impacted by a world replete with super-heroes. With that in mind, Williams, or Ironheart, will bring a more involved and meta perspective to the now heavily saturated MCU.

In terms of Ehrenreich, it is unclear what character he will play in the upcoming series. Previously, Ehrenreich played Han Solo in the Star Wars prequel film Solo. He is also playing in Christopher Nolan‘s hotly anticipated film Oppenheimer, in which he will play Richard Feynman. Ehrenreich is perhaps one of the most overlooked talents in Hollywood. His resume is filled with remarkable roles in films by talented directors, such as the Coen brothers, Francis Ford Coppola, and Sofia Coppola.

Ironheart is being created by Chinaka Hodge, who also writes the series. In addition to Ehrenreich and Thorne, the series also stars Anthony Ramos and Harper Anthony. No release date has yet been set for the streaming series, which will be released in six parts exclusively to Disney+.