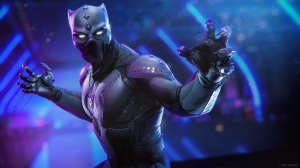 Video game publisher Electronic Arts is reportedly working on a new video game associated with the Marvel superhero Black Panther. Within the past day, a notable new tease came about suggesting that a game tied to Black Panther was in development in some capacity. And while details were incredibly sparse at the time of this tease, we have now learned much more about what this project could have in store.

Coming by way of video game industry reporter Jeff Grubb, this new Black Panther game is said to be in the early stages of development at the moment. The title is said to be currently going by the codename Project Rainer and is being made by a new team located out of Seattle. This development team is also said to be comprised of former members of Monolith Productions, which previously is most well-known for its work on Middle-earth: Shadow of Mordor and its sequel Shadow of War.

As for what the game itself will entail, Grubb went on to say that it will be a single-player, open-world RPG. In regard to the story, Grubb also teased that it has quite a bit associated with what will be seen in the upcoming film Black Panther: Wakanda Forever. In short, the narrative is said to start with the original Black Panther being dead. From here, players must look to take on the mantle as a new character that steps into that role. It wasn’t made clear whether or not T’Challa would be the playable version of Black Panther in the game or not, though.

As for why EA is looking to publish this game in the first place, it sounds as though the company is looking to further capitalize on the success of Star Wars Jedi: Fallen Order. Prior to the release of Fallen Order, EA had essentially stopped releasing single-player games that didn’t contain live-service elements. However, Fallen Order was a massive hit, which led to the forthcoming sequel, Star Wars Jedi: Survivor, getting greenlit. Now, EA looks to be making a larger splash in the single-player space, this time by teaming up with Marvel Games.

Again, it’s worth stressing that this Black Panther game is in the early stages of development, so we likely won’t see or hear anything about it for quite a long time.