Synopsis – Honor’s sole focus is getting into Harvard. Willing to do whatever it takes, Honor concocts a plan to take down her top three competitors, until things take a turn when she unexpectedly falls for her biggest competition.

My Take – Having a quick look at the promotional material for this directorial debut of Oran Zegman, one might think that this would be just another coming-of-age high-school comedy inspired by director John Hughes‘s filmography with little else to offer.

However, despite beginning with every tried and true trope of films about high school and teenagers, the film turns into an immediate winner when it unfolds into a surprisingly dark and highly emotional comedy drama that successfully transcends tropes and moves in unexpected and original directions. Taking viewers completely off-guard.

Sure, it contains similar plot points that have happened in a multitude of coming-of-age teen dramas across decades, but this David A. Goodman (The Golden Girls, Futurama) written film gets away with it because there is genuine love for the genre here. Not only in the way it recognizes clichés, which are cleverly deployed, but with its romantically odd couple at its core that really works.

Simply put, anchored by a star winning performance by Angourie Rice, it is a wonderfully directed film that is witty and engaging with a huge heart at its center, somewhere on the lines of excellent films like The Perks of Being a Wallflower (2012) and Love, Simon (2018). There is such freshness and vibrancy to this Paramount+ release that it is almost impossible not to like it.

The story follows Honor Rose (Angourie Rice), an ambitious high school over-achiever who is the visage of the perfect student, rounded out with great grades, a philanthropic streak and a ton of extracurricular activities lining her resume. All done due to her determination to get into Harvard and escape her bland hometown, assuming she can first score the coveted recommendation from her guidance counselor, Mr. Calvin (Christopher Mintz-Plasse).

But when she discovers that she’s one of four students in the running for his recommendation, Honor furiously schemes to ruin her rivals’ grades with a ludicrously complicated plan to cause distractions, like joining the theater club, staging a Tudor-themed play written by a friendless weirdo Kennedy (Amy Keum), casting Travis (Armani Jackson) a sweet closeted jock in the lead to fuel his attraction to school mate Gary (Ben Jackson Walker) and seducing Michael Dipnicky (Gaten Matarazzo), a bullied nerd and her chemistry lab partner into falling in love with her.

What ensues is a bright and energetic film with some ultimately important messaging. The film excels as it transitions from its first to the second act. The script by writer David A. Goodman enables the first act to be very funny, even edgy, and you slowly see Honor discover there are things more important than her need to succeed if others fail. With each manipulation, her target’s lives begin to improve. The film turns warm-hearted as we see Honor’s heart unexpectedly begin to defrost.

Midway through the film we experience a very interesting shift, both in form and narrative, as the story starts to gain more depth in its portrayal of the characters and their interactions. This passage, so to speak, definitely enriches the film. Not only does it give director Oran Zegman the opportunity to showcase her versatility as a director, but also that of the cast, who adapt their performances accordingly, and do so well. 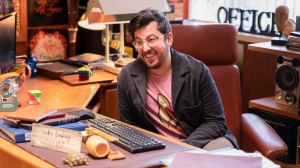 Yes, the dark twist in the final act, though surprising, may not find some takers and the ending chorus of conclusions wraps up a bit too neatly. Yet, that doesn’t invalidate the enjoyable ride that is all wrapped up in a film that is full of emotions, thrills, humor, and heart.

A large part as to why this film works as well as it does is thanks to Angourie Rice’s performance as the titular Honor. Already proved her mettle as a performer in films like The Nice Guys (2017) and The Beguiled (2017), and the HBO series Mare of Easttown, Rice goes all-in here, fully inhabiting another snarky teenager, one who dominates practically every scene of the film. She also has wonderful chemistry with Gaten Matarazzo, who also delivers one of his strongest performances to date.

Even watching Matarazzo break away slightly from his nerd ‘Stranger Things’ reputation and show a different kind of charm is refreshing, if not somewhat unbelievable, as they develop a romantic relationship. Christopher Mintz-Plasse is also in scene-stealing as the creepy guidance counselor.