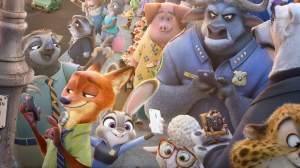 In 2016, Disney‘s Zootopia stole our hearts and snagged an Oscar for Best Animated Feature Film. We got to meet a whole world of new characters who all lived together harmoniously across a number of districts. Throughout the film, and on Judy Hopp’s (Ginnifer Goodwin) train ride to the titular metropolis from Bunnyburrow, we passed through just a few of those districts, like Little Rodentia and the Rainforest District. Now, in Disney+‘s upcoming animated series fans will get to explore even more of Judy and Nick Wilde’s (Jason Bateman) world in Zootopia+, and the creators dropped all of the episode titles at the D23 Expo. Collider‘s own Therese Lacson was there to share them with us!

During last year’s D23 Expo, Collider covered the first-look images shared with attendees that showed a handful of characters that would be featured in their upcoming series. Most of them were familiar faces, like crime lord Mr. Big’s daughter, Fru Fru (Leah Latham) the arctic shrew and Priscilla (Kristen Bell), and Flash (Raymond S. Persi) the sloth. At the time, however, not much else was known regarding the plot or number of episodes. A year later, though they haven’t shared a trailer yet, Disney released the titles for each of the episodes.

Though not officially confirmed, it’s safe to assume that Zootopia+ will air six episodes for its first season. When the images were first released there were a total of six, and at this year’s expo, they revealed six episode titles. In the pictures, we saw a couple of bunnies, Fru Fru and her girls, a weasel, Officer Clawhauser dancing with Chief Bogo, and more. During the panel it was revealed that the episodes are “The Real Rodents of Rodentia,” “Duke the Musical,” “Hopp on Board,” “The Godfather of the Bride,” “So You Think You Can Prance,” and “Dinner Rush.”

It looks like we can expect a The Real Housewives vibe in Rodentia, and a musical episode, as well as a reality dancing competition, maybe? For fans of the arctic shrew mafia we can expect more of the Big family in “The Godfather of the Bridge,” and so much more. Other than the titles, Disney is keeping most plot details, cast, and directors tightly under wraps. There’s no word on whether Shakira‘s Gazelle will be making comeback, but hopefully, she’ll star as a guest judge in “So You Think You Can Prance.”

Disney‘s Zootopia+ will premiere on Disney+ on November 9.