Synopsis – When a group of rich 20-somethings plan a hurricane party at a remote family mansion, a party game turns deadly in this fresh and funny look at backstabbing, fake friends, and one party gone very, very wrong.

My Take – At first glance it won’t be wrong to assume that this latest slasher seemed like A24 version of Scream, only with a modern spin. A spin which sees it drawing whodunit elements drawn from Agatha Christie‘s classic Ten Little Indians and drawing laughs from expected annoyances courtesy of a bunch of entitled Gen Z trust fund, chronically online, and inordinately woke twenty-somethings amidst all the blood and violence.

However, if you know what you’re in for, the resulting film is highly enjoyable. Based on a story from Kristen Roupenian, written by Sarah DeLappe and directed by Halina Reijn in her English-language debut, the film delivers a romp of a good time that boasts of a clever conceit and a very effective execution, while also offering a refreshing take on the murder mystery genre.

Yes, the tone might not work for everyone, as this film is loaded with subject matter that will turn certain viewers off. As films about Gen Z are more often than not cloying, on-the-nose and condescending. And some may consider the climax twist, a bit too much on the face.

However, considering how director Reijn manages to keep us thoroughly engaged and interested for its 90 minutes run time, all the while keeping the action surprising and the characters sympathetic the whole way, it is hard to ignore how smart, hilarious and cringe filled the outcome is. Making this one a genre milestone for films about this generation.

But considering how Sophie has been in out of touch with these group of über-wealthy friends for some time, the situation becomes immediately uncomfortable, as old friends quickly realizing they just don’t like each other anymore. With drugs and alcohol soon being added into the mix, along with a game that requires the skill of trying to find the killer, things begin to go very wrong when one of them actually turns up dead. Sending everything spiraling out of control.

Mostly lit by phone light and Day Glo jewellery, the setup leans big into familiar whodunit-cum-slasher tropes from a group of friends, a remote old house to a menacing storm. But the ultimate twists and turns that follow are sleekly executed and thought out, achieve those crucial elements with surprise and credible explanations. But it also convincingly holds up a mirror filled with a dash of sympathy to modern youth culture. In a moment that favors group think consensus, trying to figure out who is the killer in your group really is a deadly game to play.

But most importantly, the film is damn funny, often deliriously so. The jokes hinge on the subversion of social-media buzzwords, real issues mutated into online culture wars. It’s aimed not so much at Gen Z themselves, but at the idea that any generation is really all that elevated from the next. The language may change, but the rage remains the same. 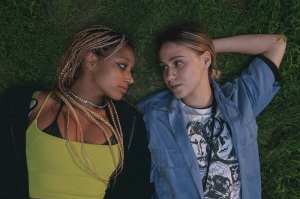 As a prelude to each round of the game, the characters sit around in a circle and slap each other in the face as hard as they can. That’s what passes as group therapy for these people. Sure, while the script can be loose at times, with inconsequential scenes dragging on for too long, but the film is paced well enough for its action to complement its bold visuals.

Here, director Reijn, with the help of cinematographer Jasper Wolf, masterfully constructs a foreboding and claustrophobic visual landscape. As action escalates, we get multiple shots from Bee’s perspective, observing the mansions’ seemingly endless hallways as they menacingly unfurl, as if daring us to imagine what might be lurking at the other end.

This tension is deepened when, in the thick of the indoor goose-chase, the girls light their ways with iPhones and glow-sticks, creating a hypnotic, dizzying laser tag-esque war zone. There’s also a novel, if not entirely surprising, last-act twist that separates it from the crowd. I would say once all cards have been played it’s a film that’s easier to admire than to love, a trick to reluctantly applaud rather than cheer for.

Performances wise, Rachel Sennott gives a standout performance and the film’s real comedic gem. There’s an exquisite hollowness to the little yay she lets outs. Maria Bakalova as the only person not drowning in privilege is instantly likable as the closest thing the film has to a root able protagonist. Pete Davidson and Lee Pace are both in their element, and very clearly having a blast, while Amandla Stenberg, Chase Sui Wonders and Myha’la Herrold play to their elements well. On the whole, ‘Bodies Bodies Bodies’ is ruthlessly bold funny slasher that is smart, merciless and well-acted.