Synopsis – When a delusional house wife with a personality disorder is taken hostage by a terrorist on the loose and a husband accused of cheating on his wife have their own versions of reality, how do we know who’s saying the truth? Dhoka Round D corner is a tale of lies and harsh truths.

My Take – Over the years, Hindi cinema has proven itself to be quite adept at churning out thrillers that are primarily shot in one location, engaging one enough with its situations and dialogues. And though this latest from director Kookie Gulati (The Big Bull, Prince) certainly seem to contain everything to offer us an exciting and fascinating experience as we watch its protagonist’ viewpoints emerge with their various interpretations, unfortunately, it leaves much to be desired in the end.

While the hostage drama is never not engaging, its script and staging is so terribly banal that in its compulsion of making the proceedings thrilling, the plot just gets lost. There isn’t a whit in director Kookie Gulati‘s film that can rise above the sloppy writing. Right after the first act the whole set quickly gets repetitious and tedious, only to pick up steam in the third act when the scenarios become more heated. But that too until the predictable plot twists completely derails whatever was build up before.

Only those who are inexperienced with the genre will be left surprised with the major plot twist. To make matters worse, the characters and their backstories are never developed enough to be feel compelling or convincing. Sure, fans of suspense thrillers may appreciate the film for its performances and efforts taken, but for the rest this one will surely be forgotten on to oblivion. 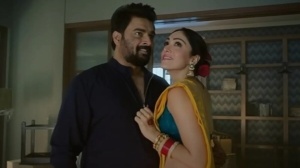 The story follows Yatharth Sinha (R. Madhavan) and Sanchi Sinha (Khushalii Kumar), a once happily married couple who are now on the verge of divorce. On the particular morning, following a quarrel between the two, as Yatharth heads to work, Haq Gul (Aparkshakti Khurana), a Lashkar-e-Taiba terrorist, who managed to escape police custody, ends up taking refuge in his flat and takes Sanchi hostage.

When Yatharth sees this on the news, he rushes back to the apartment complex, and finds ACP Harishchandra Malik (Darshan Kumaar) taking charge of the situation as he was the one who had initially arrested the dreaded terrorist, convicted of killing 13 students in a hostel blast.

But while Malik is determined to breach, Yatharth informs him that the situation is way direr than perceived, as Sanchi is suffering from a delusional disorder, and can turn volatile any moment, if not prescribed her medication.

Meanwhile, Sanchi begins convincing Haq that her husband is having an affair with her psychiatrist and has been gas lighting her regarding her medical condition for monetary gains. But as time passes and everyone begins playing innocuous games with each other, the whole situation begins to get out of control.

As convoluted as the plot may sound, the film doesn’t give time to its viewers to linger on it. A coherent answer to that question isn’t available until the last quarter of an hour or so of the film, by which time the audience is given a few more morally and psychologically knotty points to contend with.

Despite all the sound and fury and the hemming and hawing, the film is unable to create tension or suspense of any kind. The script lacks coherence. You are expected to invest in characters or at least go with the flow of the proceedings. But blame it on the clueless writing and directorial inadequacies as on the actors looking and sounding increasingly desperate to make it all work.

You can almost sense that they know that no effort on their part would be enough to turn things around. Most comic scenes come from the media coverage of the episode. When a journalist asks a neighbor what she thinks about Sanchi, she reminisces how welcoming the hostage was, thinking she is dead. It’s a classic case of fake news. Even none of the twists and turns are surprising. You have seen it before in some film or the other. After twisting and turning for most of the screen time, the film eventually takes on the uphill task of the big reveals.

Performance wise, Aparshakti Khurana makes an impact and portrays the character’s emotions with ease, whether they are irate, disheartened, or confused and helpless. He seamlessly shifts between being comically volatile and endearingly vulnerable. He accurately captures the accent and appearance of Kashmiris. Debutante Khushalii Kumar does a good job of pulling off the dichotomous act as a delusional, manipulative and seductive housewife and a volatile woman well.

While Darshan Kumaar ably executes the role of a stern cop, R. Madhavan feels a bit one-note, reduced to playing second fiddle to the rest of the cast. On the whole, ‘Dhokha: Round D Corner’ is an average hostage thriller let down by its predictable plot twists.