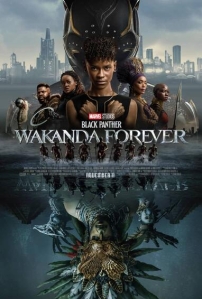 Today, a Dolby poster has been released for the highly anticipated next installment in the Marvel Cinematic Universe, Black Panther: Wakanda Forever. The new poster gives a tease at characters new and old, and lets fans know that they can experience the film at Dolby cinemas on November 11.

The biggest, and most eye-catching, part of this new poster is the tease of the new character, Namor the Submariner (Tenoch Huerta). The background of the poster is entirely composed of the headpiece the character has been seen wearing in past promotional material. The headpiece is very clearly inspired by the various cultures found in Mesoamerica, with it designed to look like a mythical beast with golden platting adorned with blue and green feathers.

In the foreground, we see five returning characters covered in shadow. They are Shuri (Letitia Wright), Nakia (Lupita Nyong’o), Okoye (Danai Gurira), Queen Ramonda (Angela Bassett), and M’Baku (Winston Duke). While the characters are covered in shadow, it does tease the new outfits we can expect them to be wearing in the film, but this poster is definitely giving all the attention to Namor.

All the focus of the poster going to Namor does make sense. While it has taken the character many years to finally show up in the MCU, Namor is actually one of the first characters created by Marvel Comics, debuting in 1939. His arrival is one that many fans have been waiting anxiously for.

Black Panther: Wakanda Forever will see Black Panther director Ryan Coogler return to direct off a script he wrote with Joe Robert Cole. The film’s release will make for a bittersweet occasion for fans and those who worked on the film. Back in 2020, Chadwick Boseman passed away, and the original plan for the sequel had to be changed, and the film was reworked to serve as a tribute to the actor that captivated so many audiences as the titular superhero. While fans are excited to see the next installment in the MCU and finally see Namor on the big screen, with everything going on behind the scenes it is hard to imagine a single dry eye in the theater. The film stars Wright, Nyong’o, Gurira, Bassett, Duke, Huerta, Dominique Thorne, Florence Kasumba, and Michaela Coel.

Black Panther: Wakanda Forever is exclusively in movie theaters, including Dolby cinemas, starting November 11. Check out the new poster and trailer below:

Check out the exclusive @dolby artwork for Marvel Studios’ Black Panther: #WakandaForever, only in theaters November 11.