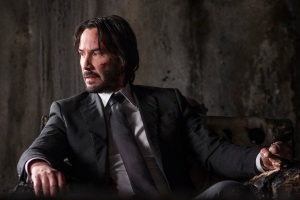 Fans will have to wait a little longer for Keanu Reeves to make his first major appearance on American television. Per Variety, the star has left Hulu‘s adaptation of Erik Larson‘s bestselling novel The Devil in the White City. He was originally slated to play one of the two leads, Daniel H. Burnham, in the series. The show has been in development since 2019 until being ordered to series in 2022. Production is expected to begin in the Summer of 2023, but now it still needs to find both of its leads.

The Devil in the White City has been shaping up for a while as a major production for Hulu. The book itself is a classic historical nonfiction piece, becoming a New York Times bestseller and garnering an Edgar Award for Best Fact Crime among a slew of other honors. Moreover, the production has both Leonardo DiCaprio and Martin Scorsese attached as executive producers with Sam Shaw of Castle Rock fame writing and serving as showrunner. For both DiCaprio and Scorsese, it’s a passion project stemming back years before it ever landed at Hulu and became a series, and with the prospect of Reeves bucking the trend of his career and taking on a television role, there was a lot to be excited about coming into the eight-episode show. Now, the search is underway to find a new Burnham and an H. H. Holmes.

So far, neither Hulu nor Reeves‘s representatives have commented on the star’s departure from the series. He was the only member of the cast announced for the series to this point. Despite his departure, the rest of the creative team remains intact with DiCaprio, Scorsese, and Shaw joined by fellow executive producers Rick Yorn, Jennifer Davisson of Appian Way, Stacey Sher, Lila Byock, and Mark Lafferty. ABC Signature is producing with Paramount Television Studios.

Larson‘s book is set amidst the setup of the 1893 Chicago World’s Fair. It follows Burnham, a visionary architect facing the daunting challenge of creating a spectacle for the fair that will write his name into the history books forever. In the shadow of his work, however, lurks Holmes, the man largely credited as America’s first serial killer, who lured victims into his notorious “Murder Castle” under the nose of everyone in Chicago. The story unfolds across four parts that intertwine the stories of Burnham and Holmes and how both made their mark on the county in very different ways.

The Devil in the White City will begin production next year with an eye toward a 2024 premiere.