This year’s New York Comic-Con marked a special final Con attendance for AMC‘s original flagship series The Walking Dead. During the panel, Chief Content Officer Scott Gimple was joined by cast members to discuss their final eleventh season, coming to its 12-year conclusion this November, and The Walking Dead Universe. Not only did they share footage from this week’s upcoming episode, but stars Lauren Cohen and Jeffrey Dean Morgan, who play Maggie Rhee and Negan Smith, respectively, revealed first-look photos from their Manhattan-based spinoff The Walking Dead: Dead City ahead of its 2023 premiere.

At NYCC 2022, Gimple and members of The Walking Dead‘s cast came together for one last epic panel with their fans before the show’s final conclusion this November. After 11 long seasons, the final season being split into three parts, there are many unfinished stories and character arcs needing to be wrapped up. In attendance were some of Season 11’s main players including Norman Reedus, Lauren Ridloff, Eleanor Matsuura, Paola Lazaro, and Michael James Shaw. Naturally, with Cohen and Morgan present, fans were hoping for — and anticipating — some news from the pair’s spin-off series, formerly The Walking Dead: Isle of the Dead, and now titled Dead City.

Premiering in April 2023, not much has been disclosed regarding this NYC spin-off up until this point. With production expected to wrap this month, fans have been curious as to how these two rivals, of all the many TWD characters, end up in the same spin-off series together, traipsing the streets of Manhattan where the show is said to take place. Considering their rocky history, and the vague logline according to Deadline, which simply states the two are “traveling into a post-apocalyptic Manhattan long ago cut off from the mainland,” the relationship can go one of two ways. Either things end on a high note in The Walking Dead Season 11C, and they become traveling mates, or Maggie is hunting Negan and out for blood. The photos shared at NYCC seem to lean towards the latter.

In the images from the panel, we see our two stars roaming bits and pieces of the series’ new urban setting. Up until this point, the original series with Cohen and Morgan has taken place in the more rural countryside between settlements. Most of the photos from Dead City depict the two exploring alone, showing parts of the crumbling cityscape. We know from the previously released description that Manhattan is “filled with the dead and denizens who have made New York City their own world full of anarchy, danger, beauty, and terror.” In one picture Maggie is seen sitting at a bar, calmly having a conversation with a new character. In another, both Maggie and Negan are joined by yet another character and the three of them appear to be stopped dead in their tracks by something offscreen. One particularly interesting image does show the two facing off, with Negan’s hands up in what looks to be submission, and Maggie’s knife against his throat. So much for roomies in NYC?

Written and executive produced by showrunner Eli Jorné, Dead City has confirmed one other cast member as Gaius Charles who will portray “ruthless” and “unyielding” Perlie Armstrong. Both leads, Cohen and Morgan, also serve as executive producers, with Gimple attached as the Chief Content Officer overseeing the project.

The Walking Dead: Dead City is set to premiere in April 2023. The Walking Dead‘s eleventh and final season is airing new episodes weekly on AMC, with AMC+ subscribers able to stream a week in advance, all leading up to the finale on November 20. You can see the NYCC photos and watch season 11C’s trailer below: 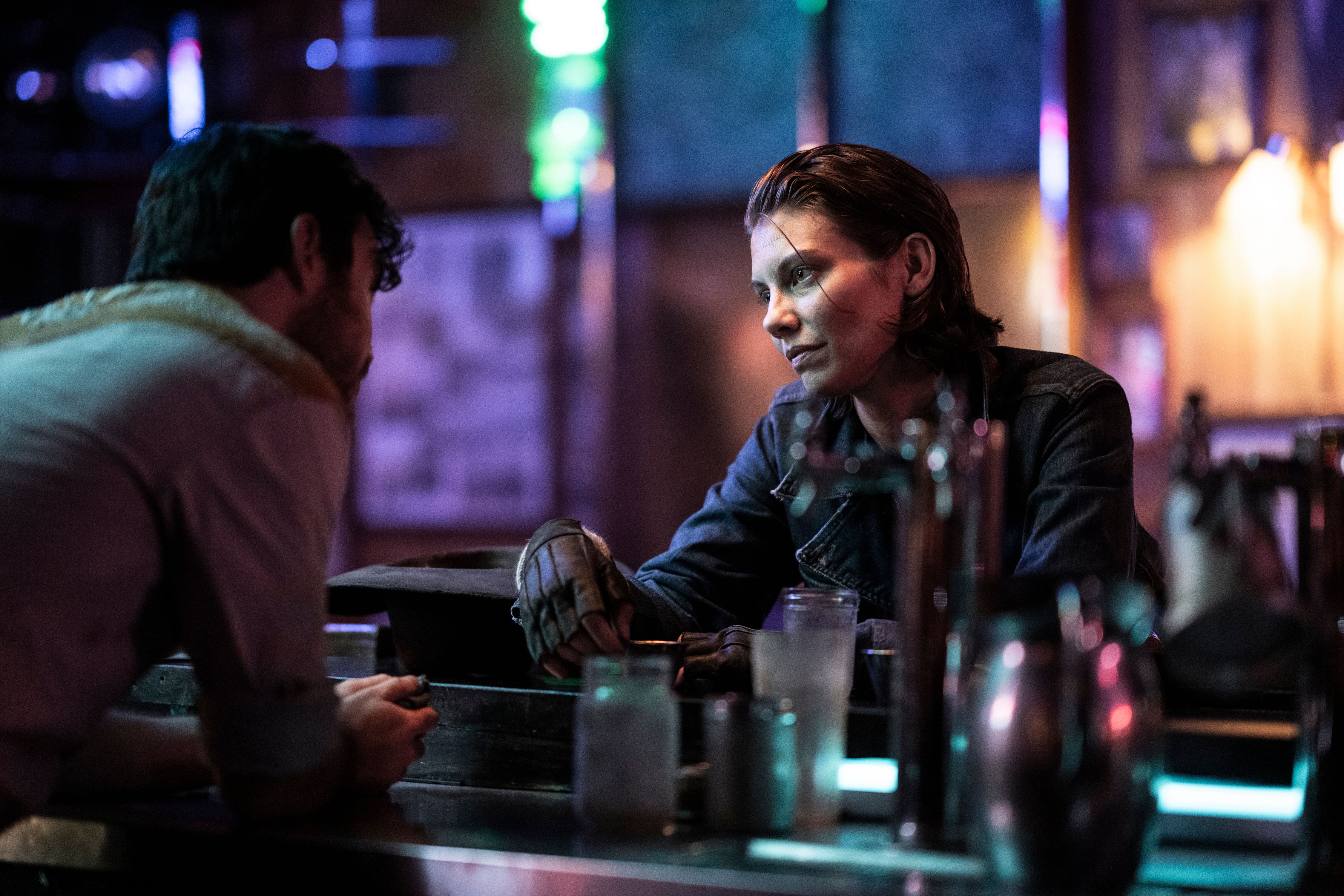