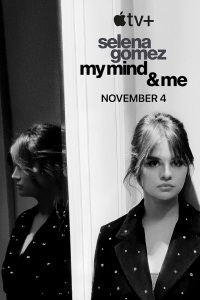 Following up on the teaser released back in September, Apple TV+ unveiled today a new trailer for Selena Gomez: My Mind & Me. The highly anticipated documentary will chronicle the life and career of one of the youngest superstars the world has ever seen – and the toll it takes on Selena Gomez‘s personal life. The documentary feature will provide some never-before-seen footage of Selena’s recording sessions for her albums, but also get down to the nitty and gritty aspects of her life, including her lupus diagnosis, mental health, and her wake-up call to activism. As previously revealed, fans and Apple TV+ subscribers can expect to stream it in early November.

The trailer for Selena Gomez: My Mind & Me makes it clear that the glamorous pop star life will serve only as background to the main story. Gomez will be blunt and reveal what it felt like to grow up in front of the camera and talk about her sad realization that she’s been working ever since she was a little kid. The child actor was a Disney star who made her acting debut in Barney & Friends at the age of 10. She gained international recognition after starring in Wizards of Waverly Place. In the documentary, Selena will also talk openly about her depression and anxiety.

Selena Gomez: My Mind & Me will also take us on a journey with the artist through her commitment to be an active voice to help other people across the planet. In 2009, Gomez became the youngest-ever ambassador for UNICEF and has been a vocal advocate for charitable causes inside and outside the U.S. ever since.

The last couple of years have been good for Selena Gomez fans, entertainment-wise. Aside from releasing the 2020 critically acclaimed album Rare, the international pop star also starred in the highly popular Hulu series Only Murders in the Building and tried her hand with daring recipes in the kitchen of the HBO Max show Selena + Chef, which premiered its fourth season back in August.

Selena Gomez: My Mind & Me is directed by Alek Keshishian, who’s best known as a frequent collaborator to Madonna. He’s the one who helmed Madonna: Truth or Dare, one of the most famous documentaries of all time, and he also co-wrote W.E., one of the few movies the queen of pop has ever directed. With Selena, Keshishian worked previously on the music video for the artist’s single “Hands to Myself”.

Apple TV+ debuts Selena Gomez: My Mind and Me on November 4.