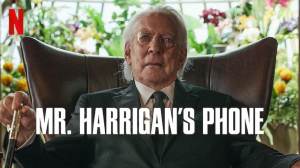 Synopsis – When Mr. Harrigan dies, the teen who befriended and did odd jobs for him, puts his smart phone in his pocket before burial and when the lonely youth leaves his dead friend a message, he is shocked to get a return text.

My Take – Admittedly, despite being an avid fan of Stephen King’s works, his big screen adaptions are usually more miss than hit, ranging from excellent (The Shining, It, Doctor Sleep) to the ridiculous (Cell, The Dark Tower, Thinner) quite broadly, however his latest, in the hands of writer-director John Lee Hancock (The Highwaymen, Saving Mr. Banks), falls somewhere in between.

Adapted from an 88-page short story of the same name from King’s 2020 novella If It Bleeds, the film, backed by Netflix, Ryan Murphy and Blumhouse Productions, has all the hallmarks of the acclaimed author’s usual ingredients, specifically a small-town coming-of-age and enough supernatural elements to give one the creeps.

Nevertheless, despite appropriately maintaining an eerie and creepy tone throughout, this one is not exactly a horror feature, but instead decently works more as character study, and about knowing how to deal with death and hard times.

While the deceptive marketing leaned towards it being a story from the ‘King of Horror’ with a high concept premise, yet behind the veil lies a simple coming of age story that is mild by modern horror standards, but is well-acted, fitting, enveloping and works for what it is.

Set in 2003 in the town of Harlowe, Maine, the story follows Craig (Colin O’Brien), a young boy living an inconspicuous life with his widowed father (Joe Tippett). That is until, following his reading of a scripture at church, Craig finds himself employed by Mr. Harrigan (Donald Sutherland), the town’s wealthy recluse, to read to him three times a week for a fee due to his failing eyesight.

Over the next five years a teenage Craig (Jaeden Martell) continues reading various classic novels to Mr. Harrigan, with the two developing a close bond of their own. And when Craig gets some money of his own, he treats Mr. Harrigan to his first iPhone. However, when he unexpectedly dies, Craig is shocked to see his addiction to the new phone extend beyond the grave, with Craig still receiving calls and cryptic texts.

Things however turn further horrific when people who hurt Craig, both physically and emotionally start dying, forcing Craig to question and reevaluate his role in all that is happening.

While everything about the production just oozes that creepy vibe. From the music, the cinematography to the dreary small town setting that is designed to keep you hooked as you try to figure out what direction the story is going to go in, the film never goes full on into the supernatural, holding itself on the edges and dips its toes in occasionally tending to delve more into the real-world emotions and consequences of grief and loss.

Resting the urge to delve deeply into the mechanics of using modern technology to speak to ghosts, director Hancock admirably uses restraint in refusing to transform the film into a popcorn-spilling shocker. In fact, the film never pushes Craig into any real danger nor does it explicitly state whether the connection to the phone is supernatural or just a glitch from an earlier generation of phones. Here, the scares are more intimate and personal, a sense of deeply unpleasant perpetual dread that comes from living with oneself after doing something wrong.

The film is more of a decent coming of age story as well as a decent commentary on society’s absorption into their smartphones and while the satire of smartphones and their role in society is pretty heavy handed, the coming-of-age elements do work really well with the film’s meditation on grief and revenge eliciting solid pathos.

It helps that the film features strong performances across the board with Jaeden Martell continuing to showcase himself as a solid and capable lead he is turning out to be having previously starred in the 2017 adaption of It. Here, Martell had a huge job carrying the film on his young shoulders but succeeds with visible ease, while making for a solid anchor for the story, delivering the emotional resonance we’re looking for.

Veteran actor Donald Sutherland holds your attention firmly as always, his screen presence has never been in doubt and the character of Mr. Harrigan himself was in suitable hands. The scenes between him and Martell’s Craig are well done in showing them building their friendship.