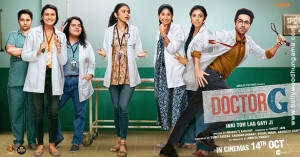 Synopsis – Uday Gupta finds himself as the lone male student in the Gynaecology department. His reluctance leads to chaos, confusion, comedy and eventually, great camaraderie with his fellow classmates.

My Take – Having found his niche a few years ago, Ayushmann Khurrana has been on a dream run ever since. By consistently and (mostly) successfully picking out commercial projects focused on topical and socially relevant subjects, Ayushmann has truly become the face of content-driven films in Hindi cinema. And his latest too, is no different.

Directed and co-written by debutante Anubhuti Kashyap, his latest sees him play a male gynecologist and uses the profession to drive home some important messages that are rarely broached in Hindi cinema, let alone adumbrated at length. Resulting in a ‘typical’ Ayushmann Khurrana starrer that is part funny, part heartwarming, and immensely watchable.

Sure, this certainly isn’t a Vicky Donor (2012) or a Badhai Ho (2018), but the film most certainly has enough moments that dares to go beyond the obvious. Yes, the endeavor is not out-and-out engagingly entertaining, but the fun lies in the crisp lines, in the sincere supporting performances, and in its overall treatment. And of course, it helps that Ayushmann is every bit awesome, as he is sincere and charming in each of these.

The story follows Uday Gupta (Ayushmann Khurrana), an ambitious medical student who aspires to become an Orthopedic surgeon, but due to a low rank finds himself enrolling for a degree in Gynecology hoping to use the placement as a stopgap arrangement while he prepares for another calculated go at what he really wants. Initially reluctant to grasp the subject, as the solitary male in an all-woman section, Uday is up against not only a bunch of girls who are no mood to roll out the red carpet but Nandini Shrivastava (Shefali Shah), the head of the gynecology department, is not ready to grant him any quarters.

Faced with his own biases and misgivings, and a bond with senior with Dr. Fatima Siddiqui (Rakul Preet Singh), whose engagement is round the corner, Uday is forced to lose his ‘Male Touch’ in order to serve in the truest sense of the word. Surrounded by strong women who know what they want, Uday, despite the initial hiccups, begins to see value in ’empowering’ himself with the right notions about masculinity and ambition. It is the women who eventually help him disavow himself of obsolete ideas about what a man can do and cannot do.

Without a doubt, this one is a fun film that addresses issues that matter with all the seriousness that they deserve. What could have become a cut-and-dry hospital comedy turns into an extremely palatable story, with an underlying social message. The writers, Sumit Saxena, Saurabh Bharat and Vishal Wagh, along with director Anubhuti Kashyap, have made it a point to narrate the story with a neutral gaze which has helped bring in the right elements that make a film engaging.

This one isn’t a standard feminist film focused on the empowerment of women. It is a man here who needs to lunge at all the support he can garner in order to find his way around in a setting in which he is at the receiving end.

Even a sensitive theme like losing the male touch, among some other relevant issues that unfold in the second half, have been effectively portrayed with well-written humor and scenes, which never take the slapstick route. The way comedy has been used is just right, there is never an overdose. Even in scenes where a serious topic is being handled, the impact is strong, but the delivery and performances remain subtle and dignified.

Yes, the love story between Uday and Fatima for example doesn’t particularly stand out as that bit looks hurriedly written, yet the strength of the film springs from the breezy nature of its storytelling, which brims over with moments that alternate between the hilarious and the sensitive. It takes a serious turn in the run-up to the climax and its intensity rises appreciably but the film makes it a point to eschew shrillness and overt solemnity.

Performance wise, Ayushmann Khurrana is both sincere and charming yet again. Whether he is the hassled doctor on campus trying to cope with all his women peers, handling the matters of his heart or reasoning with his mother at home, Ayushmann is utterly believable, hilarious and on point. Even as his character evolves, he never loses grip. The gorgeous Rakul Preet Singh once again puts up a strong act, and lends excellent support to Ayushmann’s character, hand-holding him through his emotional crises and pushing him out of his old-fashioned beliefs and ideas about men and women.

Shefali Shah‘s strong-headed character, stays with you thanks to the powerful performance delivered with tremendous conviction. Sheeba Chaddha too continues to show her range that needs to be tapped into more and more. On the whole, ‘Doctor G’ is yet another fun and socially relevant Ayushmann Khurrana film that addresses matters with all the seriousness that they deserve.