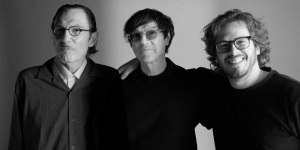 Focus Features is re-teaming with the sibling duo behind the band Sparks for a new musical epic at the studio titled X Crucior. After appearing as the subjects of Edgar Wright‘s documentary The Sparks Brothers from Focus, Ron Mael and Russell Mael will put their talents to use, penning and executive producing the film. The project is still in its early stages and details of the epic’s plot are being kept close to the vest at this time.

As Sparks, the Mael brothers have enjoyed success as a more niche art pop band. While not particularly prevalent in the mainstream, they’ve maintained a loyal following since first bursting onto the scene in 1968 and have continually reinvented their style over time. However, their influence on music has been massive, something captured in Wright’s documentary. Featuring a slew of artists across the industry, the film celebrates Sparks‘s five decades together by exploring their musical journey and the imprint they made with their unique style.

This won’t be the first time the brothers have worked together on a musical. Previously, they wrote and composed the Leos Carax-directed Annette starring Adam Driver and Marion Cotillard. The film proved to be a hit upon its premiere at the 2021 Cannes Film Festival, going on to win five César Awards. In terms of other work on-screen, they also composed original songs for the Jean-Claude Van Damme film Knock Off and even recorded a few tracks for the teen comedy Bad Manners. Sparks also has a new album on the way for 2023 with a world tour planned to celebrate its release.

Joining the Mael brothers on X Crucior will be Kiska Higgs who will oversee the production for Focus Features. Currently, no director or other producers are attached to the project. Whatever happens with the project, Ron and Russell Mael are sure to experiment with it. They’ve flirted with the musical genre plenty outside of Annette, even creating the radio musical The Seduction of Ingmar Bergman in 2009.

X Crucior marks another notable project for Focus amidst a major hot streak. Among their most recent projects are Todd Field‘s TÁR and James Gray‘s Armageddon Time, two major critical hits and award contenders. Also on their plate in the near term is the star-studded Spoiler Alert starring Jim Parsons. The production company won’t slow down in 2023 either, with Wes Anderson coming in with his new film Asteroid City alongside a new comedy from Ethan Coen, Lisa Frankenstein from Zelda Williams, and the highly anticipated My Big Fat Greek Wedding 3, which recently wrapped filming in Greece, among other major titles.

Stay tuned here at Collider for more on X Crucior as work gets underway on the project.