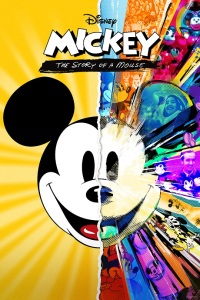 “Never lose sight of one thing, it was all started by a mouse,” said Walt Disney. That’s the crux of the documentary Mickey: The Story of a Mouse, which just released it’s full trailer. The film will focus on Mickey Mouse’s ongoing, and permanent, artistic and cultural significance as well as exploring the associated controversies that surround the animated mouse who will soon be celebrating his 100th birthday.

The world’s most famous animated character, an enduring figure today, Mickey was created by Disney and Ub Iwerks in 1928. Originally inspired by silent film personalities like Charlie Chaplin’s Tramp, Mickey is identifiable across the world. He debuted publicly in Steamboat Willie, one of the world’s first sound cartoons, and went on to appear in over 130 films. Ten of Mickey’s cartoons have been nominated for Academy Awards, winning one for Lend a Paw in 1941. He was awarded a star on the Hollywood Walk of Fame in 1978.

The documentary will also seek to answer the question of what Disney was trying to achieve with Mickey, when they struggled to know how to utilize him. After his feature film Fantasia, his only starring role, Mickey became an icon of consumerism as much as happiness to fans.

The trailer demonstrates the instant recognition that ‘two dimes and a quarter’ placed together can mean to people across the world. To fans, Mickey ‘represents light in a world that can be very dark’. He became an icon of hope during the Great Depression, and a mascot of American industry during World War II, and his presence continues to delight fans young and old, even today.

The film has been produced by Morgan Neville, Meghan Walsh, Chris Shellen and is helmed by Jeff Malmberg. Neville and Malmberg previously teamed up for the Academy Award-winning documentary Won’t You Be My Neighbour? Featured in the documentary are a number of important figures at Disney, including animation artist Floyd Norman and director of the Walt Disney Archives, Rebecca Cline. The new Walt Disney Animation Studios hand-drawn animated short Mickey in a Minute is a part of the feature, which will also documents its animation process by Disney animators Eric Goldberg, Mark Henn and Randy Haycock.

“Ninety-four years ago, Walt Disney created a mouse that would become one of the world’s most beloved characters,” said Marjon Javadi, vice president of Disney Original Documentary and Docuseries for Disney Branded Television/Disney Original Documentary. “We are excited for the world to see Mickey Mouse in a way they’ve never seen him before. Our award-winning team of filmmakers captures Mickey’s journey through the years and reminds us why he has had such an impact on us.”

You can see the full trailer for Mickey: The Story of a Mouse , as well as the synopsis below. The documentary premieres on Disney+ on November 18. Oh boy!

“One of the world’s most beloved icons, Mickey Mouse is recognized as a symbol of joy and childhood innocence in virtually every corner of the globe. It has been a remarkable journey for a character dreamed up at a low point in the career of Walt Disney, an ambitious young artist who moved to Hollywood from Kansas City, Missouri. Disney’s groundbreaking short “Steamboat Willie,” the first synchronous-sound animated film, turned Mickey into an overnight sensation and made shorts featuring the plucky mouse a staple of moviegoing during the height of the medium’s popularity. In the decades that followed, Mickey was transformed into strikingly different versions of himself, reflecting both the trajectory of his creator’s stunning rags-to-riches career and dramatic societal shifts —positive and negative — in the nation he came to represent.”