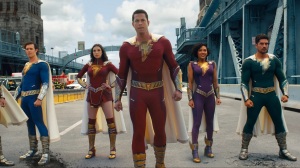 2022 has been a great year for superhero content for both DC and Marvel, but it’s never too early to look ahead to the exciting comic book films coming out in 2023. One of the sequels we’re getting next year is Shazam! Fury of the Gods. We got our first official look at the film with its teaser at San Diego Comic Con back in July. Now, DC fans have the first poster for the highly anticipated superhero comedy sequel.

The poster was shared by Shazam himself Zachary Levi on his various social media pages, and sees our hero in his updated superhero costume. Gone is the hooded cape and bulky muscle suit of the first film. The suit this time around is a much sleeker design worthy of a god, with the red and gold color scheme being much more muted. However, the updated design doesn’t mean Shazam has lost his childlike wonder, as the poster hilariously has the DC hero “hanging loose” on a hoverboard scooter. It’s very much in line with the original’s posters that saw Shazam doing everyday mundane things in his super suit.

In the post Levi calls the sequel “wiser, stronger, faster, funnier,” and “overall cooler,” humorously noting he’s also “humble” when compared to his other superhero counterparts. He even makes a reference to one of the most absurd sequel titles in history, Breakin’ 2: Electric Boogaloo. When Shazam! Hit theaters in 2019 it was such a pleasant, funny, action packed, and heartfelt surprise that was great for the whole family. At the center of that was Levi who played the adult version of Billy Batson, aka Shazam. Levi captured the childlike appeal of the iconic hero perfectly and his comedic timing is next to none.

From Fury of the Gods’ first trailer, the sequel looks to be cranking everything that worked in that first film up to 11 while having a bigger emphasis on the Shazam Family. One of the best parts of the original was seeing Billy’s family get their powers in the amazing finale. Because of that, it’s going to be exciting to see this superhero family work together for a whole film. They’re going to need every last inch of their powers, too, as they will be going up against the demigods Hespera and Kalypso played by Helen Mirran and Lucy Liu, respectively.

The Shazam Family is heading back to theaters on March 17, 2023. Along with Levi, Mirran, and Liu, the sequel stars Asher Angel, Grace Caroline Currey, Jack Dylan Grazer, Rachel Zegler, Adam Brody, Meagan Good, and Ross Butler. While we wait to scream Shazam’s name in 2023, you can view the new poster down below: