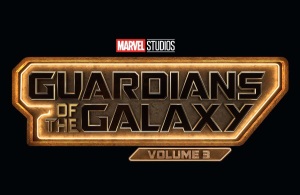 The poster depicts the full complement of the Guardians – Star-Lord (Chris Pratt), Gamora (Zoe Saldaña), Drax the Destroyer (Dave Bautista), Nebula (Karen Gillan), Mantis (Pom Klementieff), Groot (Vin Diesel), Rocket (Bradley Cooper), Kraglin (Sean Gunn) and Cosmo the Spacedog (Maria Bakalova) standing on their new ship, Bowie, against a setting sun with a dramatic backdrop, suggesting this is a final farewell but not just Gunn, but perhaps a number of these characters.

Gunn has teased that Vol. 3 would be the most emotional of the trilogy, and even spoke of how easy it was to film and produce the recently released Guardians of the Galaxy Holiday Special alongside Vol. 3 due to the serious and heavy nature of the film compared to the light and breezy festive frolic, which also dropped some big news for the Guardians going forward, including revealing that Mantis is actually Quill’s sister, and Kurt Russell’s Ego is also her father. We also learned that the Guardians have purchased Knowhere from the Collector (Benicio del Toro), essentially adopted Cosmo the Spacedog, are now traveling on a new ship, Bowie, and Groot has had a serious growth spurt since we last saw him on film.

Gunn has stated that the film will be the emotional conclusion to Rocket Raccoon’s story, having previously admitted that the pocket-rocket was his favourite character. On top of that, the Guardians will face new antagonists, including Chukwudi Iwuji’s High Evolutionary, and Will Poulter‘s long-awaited Adam Warlock, one of the most powerful figures in the history of the Marvel comics. Furthermore, Quill is continuing to deal with the heartbreak he is suffering as a result of losing Gamora during the events of Avengers: Infinity War, only to get her back during Avengers: Endgame but discovering that, as a younger variant of Gamora, the years they spent falling in love never happened for her.

Guardians of the Galaxy Vol. 3 will be the second film in the Marvel Cinematic Universe‘s Phase 5, following Ant-Man and the Wasp: Quantumania, and it will open in theaters on May 5, 2023. Check out the new poster below: