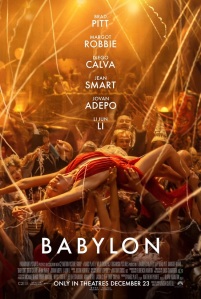 Paramount Pictures just released a new featurette that gives audiences the chance to listen to the score for the upcoming Damien Chazelle epic Babylon. The Academy Award-winning composer Justin Hurwitz, who is best known for his imaginative and original score for 2016’s La La Land, revealed how the sounds of a screaming sax and wailing trumpet of jazz mixed with modern elements created what star Margot Robbie describes as “a score for the ages.”

Written and directed by Chazelle, Babylon is a tale set in 1920s Los Angeles during an era of unbridled decadence and depravity as silent films fell out of style to make way for talkies. The comedy-drama is led by Robbie along Brad Pitt and Diego Calva, following an ensemble of characters during a time of outsized ambition and outrageous excess in early Hollywood. With Marc Platt, Wild Chickens and Organism Pictures Production on board, the highly-anticipated film features a massive cast including names such as Jovan Adepo, Li Jun Li, Jean Smart and Tobey Maguire.

In the “Scoring Babylon” featurette, Hurwitz unveils his inspiration for the score, breaking down the opposing elements of jazz and rock and roll that come together. He even cites the “unhinged” sound behind the opening party and how the banging of shoehorns contributed to the score.

“I was blown away by the script,” Hurwitz said. “And once we started talking about what the score could be, what if we use the instrumentation of a 1920s jazz band, but hinting at rock and roll and modern dance music? I got very excited about it. We wanted music that was more aggressive, more in your face.”

The cast and crew of Babylon praised Hurwitz’s work on the score he described as “complicated but gratifying.” Jovan Adepo, who plays Sidney Palmer shared what it was like to play some of the songs composed by Justin while Pitt said they gave him chills. Producer and actor Olivia Hamilton explained how listeners can feel the work Hurwitz put into the music, saying he was working on the music even before shooting began. “Our guiding principle for music was to be rooted in the time but to really push the edges of what we normally expect,” Chazelle said.

Babylon hits theaters on Dec. 23 from Paramount Pictures. Check out the Scoring Babylon featurette below.