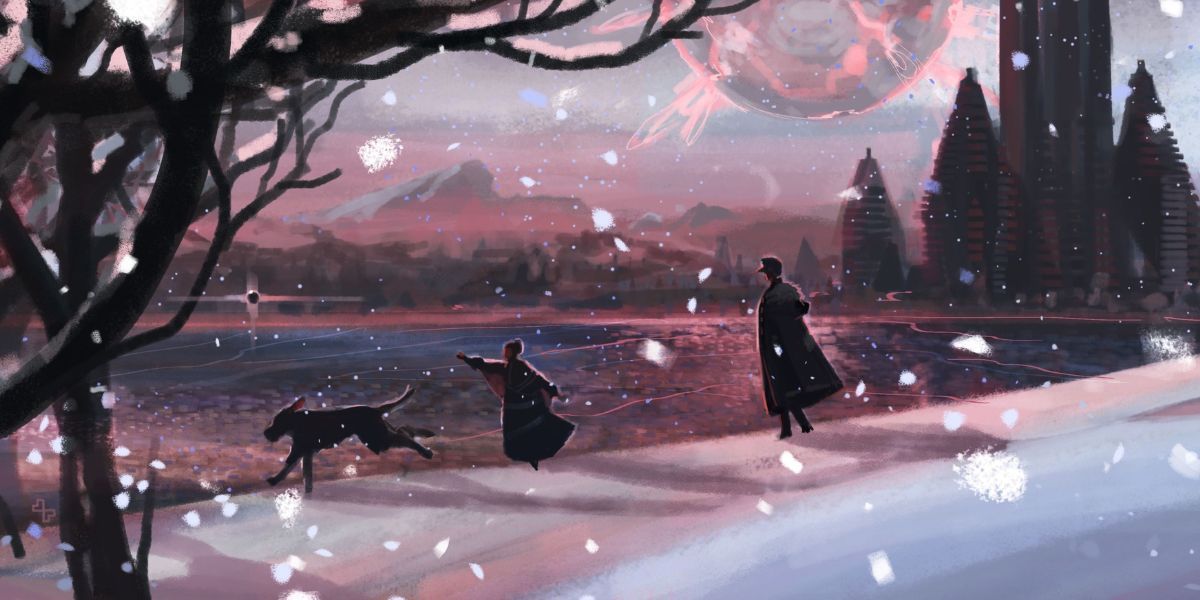 Director Zack Snyder has been unafraid when it comes to sharing updates on his highly anticipated new film Rebel Moon. The sweeping space epic wrapped filming back on December 3, though he frequently took to social media before then to show off the practical spaceships and makeup effects among other things created for the massive undertaking at Netflix. He also recently shared another behind-the-scenes image from the film that shows an ornate interior set piece that evokes the sci-fi nature of the project.

There’s not much to glean from the photo, though the set is fairly stunning. The elegant architecture looks to be a place of importance in Snyder‘s film, with a corridor and stairs leading to an elevated platform where an imposing figure is standing surrounded by several others in front of a massive circular window. Paintings adorn the walls, adding an extra sense of gravitas to the location. It looks as if it could be the palace of an important figure in Snyder‘s world. It’s definitely an unfinished shot, but the director added that there’s still a lot of work left to be done on the film.

Snyder has designed Rebel Moon to be his large-scale answer to Star Wars, crafting a multipart space opera to rival the massive Disney-owned franchise. Unlike the set pieces and effects, larger details on the actual plot of the film are being kept under wraps. However, we do know the film will tell the story of a peaceful space colony threatened by the encroaching forces of the tyrannical ruler Belisarius (Ed Skrein). They place their hopes on a mysterious young woman named Kora (Sofia Boutella) who sets out to gather warriors from across the galaxy to stand against the tyrant’s army and resist oppression. It’s said to be inspired heavily by the Akira Kurosawa classic Seven Samurai.

Rebel Moon Has a Stacked Cast in Its Favor

The scale of Snyder‘s epic has already grown to the point where Netflix is planning a second part under The Stone Quarry Productions‘ first-look deal with the streamer. In fact, Rebel Moon may be the biggest project of Snyder‘s career so far, especially considering the film isn’t based on any existing material. On top of all the practical effects work that’s being done for the film, the director also personally drew 3,000 storyboards for the film. Snyder worked with Shay Hatten and Kurt Johnstad to write the first film with the latter helping him create the story.

Rebel Moon is set to release next year. Check out the latest image below and stay tuned here at Collider for more updates on the film as it continues through post-production.