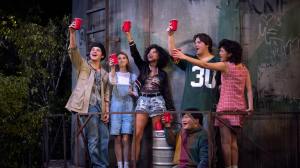 Fans of early 00s comedy series That 70s Show are saying “Hello, Wisconsin” once again with the release of a brand-new trailer for Netflix‘s spinoff series That 90s Show, which introduces a new basement gang getting up to some old tricks — including some…insightful conversations in the circle.

The new series follows Leia Foreman (Callie Haverda), who heads to Point Place, Wisconsin to spend the summer with her grandparents Red (Kurtwood Smith) and Kitty (Debra Jo Rupp). Leia seems to have inherited her father’s charming geekiness, but that never stopped him, and it certainly doesn’t stop her from finding new friends as she settles into her parent’s old haunts.

Also returning for the series are That 70s Show stars Topher Grace, Mila Kunis, Ashton Kutcher, Laura Prepon, and Wilmer Valderrama, who all appear as special guest stars. They can also be glimpsed throughout the trailer, giving fans something of an idea what they’ve been up to in the last 15 years since they all ran up those basement steps to ring in New Year’s 1980 together.

Joining the cast as well are Andrea Anders as Gwen and Nate’s mom Sherri, with Don Stark and Tommy Chong reprising their roles as Bob and Leo respectively. That 90s Show comes from original That 70s Show creators Bonnie Tuner and Terry Tuner, along with their daughter Lindsay Turner, making this a family affair both onscreen and off. Gregg Mettler serves as showrunner and executive produces alongside Marcy Carset, Tom Werner, Jessica Goldstein and Chrissy Pietrosh.

That 90s Show premieres on Netflix on January 19, 2023. Check out the new trailer and official synopsis below:

It’s 1995 and Leia Forman is desperate for some adventure in her life or at least a best friend who isn’t her dad. When she arrives in Point Place to visit her grandparents, Red and Kitty, Leia finds what she’s looking for right next door when she meets the dynamic and rebellious Gwen. With the help of Gwen’s friends, including her lovable brother Nate, his smart, laser-focused girlfriend Nikki, the sarcastic and insightful Ozzie, and the charming Jay, Leia realizes adventure could happen there just like it did for her parents all those years ago. Excited to reinvent herself, she convinces her parents to let her stay for the summer. With a basement full of teens again, Kitty is happy the Forman house is now a home for a new generation and Red is, well…Red.