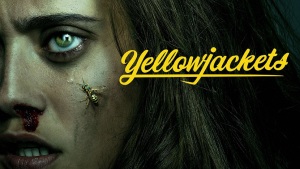 The first look at Lauren Ambrose as Adult Van in Yellowjackets Season 2 has just been revealed. With three images in total revealed by Entertainment Weekly, the first look suggests that Van lives a happy life as an adult, but still wears scars, both physically and emotionally. Yellowjackets Season 2 is scheduled to drop on Showtime in March 2023 and will continue to explore the past and present of the high school soccer team that became stranded in the wilderness after a plane crash in 1996.

Two out of the three new images from Yellowjackets Season 2 depict Ambrose as Van working at a store of some sort, donning scars on her face from the wolf attack her teenage self experienced in the show’s first season. The store seems to be a hipster hangout where fun little gadgets and other items are sold. In the first two images, Van is smiling and seems to be in good spirits as she works beside various toys. In the third image, Van appears to be at home, sitting tensely on a couch. She wears a concerned expression as she looks behind her. The first look images reveal that Adult Van seems to show herself to the world as a happy, carefree person, but beneath the surface, not everything is all roses.

Yellowjackets Season 1 was a massive success both critically and commercially. The series was nominated for seven Emmys, including Outstanding Drama Series, Outstanding Lead Actress in a Drama Series for Melanie Lynskey, and Outstanding Supporting Actress in a Drama Series for Christina Ricci. The show currently holds a rare 100 percent fresh score on Rotten Tomatoes. Not much is currently known about Yellowjackets Season 2, with star Ricci telling Watch What Happens Live “I can’t say too much about Season 2 except that it’s even crazier than season one. I was gasping reading the first two episode scripts, and working with Elijah has been amazing, we’re having so much fun and yeah, it’s been great.”

Yellowjackets Season 2 premieres on streaming and on demand for Showtime subscribers on March 24 and on Showtime on March 26.