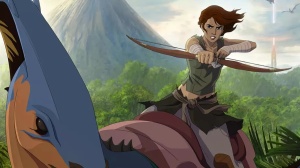 Even though projects based on video games were for many years considered bad ideas, there seems to be a new dawn for them across all media. While titles like The Super Mario Bros Movie may very well become box office hits, the video game stories are really coming to life on TV. In 2023 alone, our home screens will see titles like The Last of Us, Halo, Gran Turismo, The Witcher, Arcane, Twisted Metal… Not to mention a God of War adaptation in the works at Prime Video. And there’s room for more: ARK: The Animated Series is also coming in 2023, and the first trailer for the show dropped today.

ARK: The Animated Series was announced a long time ago, so fans have been waiting for this trailer for a while. It starts on a dark note, with a woman getting severely depressed after she receives news that her wife died. One day, she wakes up to discover she’s in the middle of the ocean and about to be eaten by a giant shark. If that wasn’t weird enough, she later realizes she’s stranded on an island with prehistoric animals and random people that arrived there the same way she did.

There Will Be Blood. And Guns. And Dinosaurs.

The animated series will also feature a twist on the video game story: Prehistoric animals, humans, and advanced technology will coexist in whatever that place is, and the woman will have to learn the rules of that unlikely setting in order to survive the wild – and her peers. So yes, there will be people with machine guns on top of dinosaurs running around. It doesn’t get more dangerous than that.

You Have to See The ARK Series Team to Believe It

ARK: The Animated Series is based on Studio Wildcard’s ARK: Survival Evolved, an open-world 2017 game released for all major consoles. The series hails from the same creators of the video game: Jeremy Stieglitz and Jesse Rapczak, which means that fans have one less thing to worry about quality-wise. Episodes are directed by animation visionary Jay Oliva, who previously helmed animated movies Justice League Dark, Batman: Assault on Arkham, and The Invincible Iron Man. He also served as the storyboard artist for major titles like Zack Snyder’s Justice League, Thor: Ragnarok, and Deadpool.

ARK: The Animated Series premieres in 2023. Its streaming home and specific release date are yet to be announced. You can watch the trailer below:

Featuring an unparalled voice cast with the talents of Michelle Yeoh, Gerard Butler, Russell Crowe, and Executive Produced by Vin Diesel, ARK: The Animated Series is an adaptation of the hit video game. In a sweeping story that spans eons of human & world history, 21st century paleontologist Helena Walker finds herself resurrected on a mysterious primeval land after tragedy. There she must learn to survive and find new allies, or die again at the hands of ruthless warlords — all while trying to uncover the true nature of their strange new world. ARK: The Animated Series will release on a to-be-announced platform in 2023. Join us then for an ageless adventure beyond life & death itself!