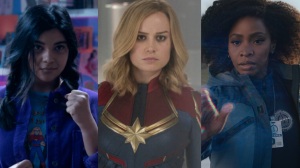 The Marvels will have a lot of narrative heavy-lifting, as it features three different heroines in its cast. Focusing on Carol Danvers, Kamala Khan and Monica Rambeau, the movie will unite them in a story that apparently has cosmic ambitions. That’s been confirmed through the film’s official synopsis, which resurrects an old group of enemies in the Marvel Cinematic Universe.

The Kree Empire was a big part of the first Captain Marvel movie, but they’re otherwise almost completely irrelevant in the MCU. The ramifications of Carol’s actions against them have yet to be truly shown, but that seems to be changing in the new movie. Here’s how The Marvels will make the Kree a bigger source of danger than ever.

The synopsis for The Marvels states that Carol has to deal with the unintended ramifications of her previous actions against the Kree Empire. In her first movie appearance, she learned of her brainwashing by the Kree, later vowing to defeat them in whatever way she could. Combating the Kree where they stand is likely the majority of what Carol Danvers has been up to in the interim between Captain Marvel and her return to Earth in Avengers: Endgame. Since this was all off-screen, however, audiences have yet to see what all this has entailed.

The synopsis speaks of a “destabilized universe,” suggesting the reach of the Kree and their influence was greater than originally shown. Putting a dent in such a vast empire would certainly put the universe in disarray, requiring Captain Marvel to step in and police the galaxy. After all, their history on Earth in the MCU was quite extensive, as they meddled in ancient affairs and encountered the Asgardian race in the past. They also convinced several species that the Skrulls were an evil people, showcasing just how vile and wide-reaching the Kree’s ambitions were. By getting rid of such a force, Carol Danvers likely freed multitudes of alien species, for better and worse.

The Skrulls were somewhat changed from their comic book counterparts, as they’re usually far more villainous in nature. The Captain Marvel movie turned the shapeshifters into a more sympathetic race, though they’ll still be the antagonists of the upcoming Secret Invasion Disney+ streaming series. Given how little build-up there’s been to this storyline in the wider Marvel Cinematic Universe as a whole, it’s still clear that the Skrulls won’t be that massive of a threat when all is said and done.

Instead, their usual prominence in the comic books could be taken by their rivals, the Kree, especially since The Marvels will at least be a theatrical movie. This film will hopefully showcase how wide the Kree’s influence went, with the galaxy as a whole touched by their evil in some way. Putting this on display would make Captain Marvel’s task of defeating them all the more visceral, giving her more reason to have stayed away from Earth for so long. From there, the Kree could show up in other Marvel Cinematic Universe projects, becoming the cosmic equivalent to the Ten Rings organization or other recurring villains/villain groups in previous MCU movies. By having their machinations revealed at a more intimate level, the Kree could become a threat that even the mighty Captain Marvel might not believably be able to defeat on her own.