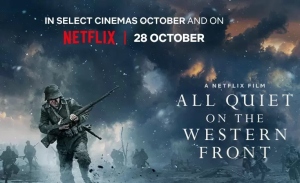 Synopsis – A young German soldier’s terrifying experiences and distress on the western front during World War I.

My Take – Though I have seen a lot of films based on the harrowing events of WWI and WWII, this Netflix release did something I didn’t expect it to do – it made me feel empathetic towards the Germans. Well obviously, to an extent.

Based on Erich Maria Remarque‘s revolutionary 1929 anti-war novel of the same name which depicted the horrific reality of war in its complete unsanitary form. So unflinching was its portrayal of WWI that the Nazi party regarded it as treasonous, had the book banned and stripped Remarque of his German citizenship, causing him to flee to Switzerland and ultimately to the U.S.

Acting as the first German-language adaptation for the screen, after the American versions of 1930 and 1979, the resulting film from director Edward Berger and co-writers Ian Stokell and Lesley Paterson is a surprisingly powerful, eloquent, and stark feature which captures the futility of war, loss of youth and corruption of innocence very effectively.

Armed with an outstanding sound design, a consistently excellent cinematography and numerous memorable scenes, the film is without a doubt an impressive attempt to envisage the hellish existence of the average soldier on the Western Front. The attention to detail is phenomenal and the portrayal of war quite unflinching.

Sure, a few drawn out scenes could easily have been shortened without losing any detail, and this isn’t the first film to show us that war is hell. However, director Berger’s take on the WWI epic novel is as poignant as ever. It’s a tough watch, but believe me, it’s worth every wince-inducing moment. 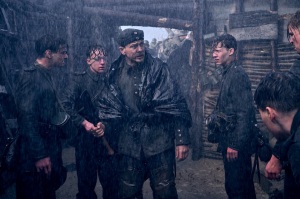 Set in Germany 1917, the story follows Paul Bäumer (Felix Kammerer), a 17-year-old whose head is filled with patriotism, honor, visions of heroism and the confidence that Germany will win the war. Lying about his age in the documents, Paul along with his school friends, Albert Kropp (Aaron Hilmer), Franz Müller (Moritz Klaus), and Ludwig Behm (Adrian Grünewald) enthusiastically enlists in the Imperial German Army, excitedly looking forward to an easy, swaggering march into Paris ahead.

However, once Paul finds himself inside a trench, unprepared and wearing another soldier’s outfit, he realizes that he has signed up for a nightmare of bloodshed and chaos.

Meanwhile, Matthias Erzberger (Daniel Brühl), a German politician, continues his desperate efforts to bring the conflict to a close in order to prevent further needless deaths. He is opposed not just by the warmongering French but the Berlin military establishment. As personified by General Friedrich (Devid Striesow), they believe German honor must be safeguarded irrespective of the cost.

Of course, the stories are entwined as Erzberger chases an end to the horror. But we’re constantly reminded how much distance there is between the military leaders and the boys in the trenches, and serving as a striking counterpoint to any heroic notion that the war is good of for one’s country.

Without a doubt, this is a brutal and uncompromising study of the realities of war. The film serves as a sobering reminder of the soldiers who died in battle on both sides. The fact the war depicted took place more than a hundred years ago doesn’t make it any less relevant. It could be shown in Ukraine today, and soldiers on both sides would understand. And the odd thing is since we’re seeing it from the eyes of the young German soldiers, who are truly clueless as to why they’re really even fighting, you do empathize and feel sorry for them.

The relationship between Stanislaus “Kat” Katczinsky (Albrecht Schuch), an older and more careworn professional soldier and Paul is the film’s emotional core, providing the humanity, humor and camaraderie that make the visceral battle scenes hit all the harder. You find yourself even rooting for them. This film humanizes them but importantly shows the politicians who are truly to blame for the atrocities. The powerful men behind the scenes, hundreds of miles away from the real pain and suffering they cause.

Here, director Berger spares the viewer nothing: Bodies are blown apart, the mud sucks weary legs down and makes the men easier targets as the bodies pile up, the hand-to-hand combat is claustrophobic and terrifying, often accompanied not by dialogue, but just the heavy breathing and desperate grunting of exhausted men trying to stay alive. It also never fails to do justice to its subject matter, though is perhaps conscious of its own classic status.

And nothing in it quite matches the shudder of the brutal opening sequence of the war machine: a soldier is killed and his uniform is removed from his corpse, washed and mended with all the others and then dished out to raw recruit Paul with the dead man’s name tag accidentally left on the collar, to Paul’s bewilderment.

The battle scenes too are appallingly visceral. The most brutal part of the film is the weapons of war used here. Tanks, flame throwers, planes dropping bombs. Men screaming in pure terror while the bullet proof tanks drive over them, while flames fill their trenches, or planes blow them up while they flee.

It also helps that Felix Kammerer brings a genuinely impressive performance that illuminates the misery of a young soldier who must face every conceivable fear. He is quickly well supported by Tjaden Stackfleet, Edin Hasanovic, Aaron Hilmer, Moritz Klaus, and Adrian Grünewald. But none compare to tremendous performance of Albrecht Schuch, who manages to steal spotlight in every frame.

Despite being the most known face among the cast, Daniel Brühl delivers a low key yet memorable turn. In other roles, Edin Hasanovic, Devid Striesow, Andreas Döhler, Sebastian Hülk, Luc Feit, Michael Stange, Alexander Schuster, Moritz Klaus, Tobias Langhoff, André Marcon, Michael Wittenborn and Anton von Lucke are effective. On the whole, ‘All Quiet on the Western Front’ is a brutal, stunning and potent reminder of the true horror and futility of war.