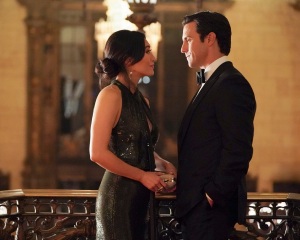 A con man and a CIA agent walk into a bar, but neither is aware of the other’s actual career. What’s sure to be a recipe for disaster lies at the center of ABC‘s forthcoming series The Company You Keep, starring Milo Ventimiglia and Catherine Haena Kim. In it, the two experience a night of passion with one another, unknowingly connected by their respective professions. Ahead of the premiere in February, ABC has shared the first trailer.

The 30-second teaser showcases the pair’s steamy start as they hit it off at a bar. However, they lie about what they actually do for living, with con man Charlie (Ventimiglia) saying he teaches yoga and undercover CIA agent Emma (Kim) revealing she’s a “pageant queen turned rocket scientist.” Interspersed throughout are clips informing the true nature of Charlie and Emma’s lives, offering an enticing look at what viewers can expect on the action side. Viewers also see that even with the high stakes at hand, Charlie and Emma seem to form a genuine connection with each other though they still remain wary.

The Company You Keep follows Charlie and Emma, both of whom are embroiled in a conflict that keeps them professionally connected. Charlie furthers the “family business” hoping that soon it will be enough for him to leave permanently. Meanwhile, Emma is hot on the trail of the “vengeful criminal” holding a debt over Charlie’s family. As they pursue their respective goals, they are forced to confront their lies in order to protect themselves and their loved ones from the dire fallout.

The Company You Keep was picked up to series earlier this year and will join other new ABC series Not Dead Yet, which is slated to premiere on Wednesday, February 8. Other February returns for the network include the final season of A Million Little Things, Grey’s Anatomy, Station 19, American Idol, and Alaska Daily.

The Company You Keep premieres February 19, 2023, at 10 p.m. ET, streaming next day on Hulu. Watch the teaser trailer below: