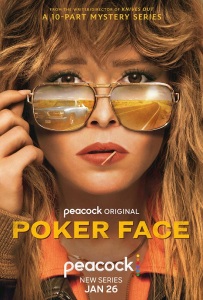 Peacock is set to welcome Rian Johnson to the world of television later this month with the release of his mystery-of-the-week series Poker Face and a new trailer introduces Natasha Lyonne‘s lie-detecting, crime-solving Charlie. Blessed with an extraordinary ability to determine whenever someone is lying, she takes to the road in her Plymouth Barracuda, encountering a new mystery, and colorful new characters, wherever she goes. The trailer finds her wrapped up in one bizarre situation after another and surrounded by a starry ensemble the whole time.

Charlie’s origin is briefly teased as the video starts, showing her seemingly landing in trouble with some shady individuals after using her lie detection to aid her in gambling. Needing to keep moving in order to avoid the thugs after her, she lives on the road, traveling from stop to stop with everything out of her car. Like any good mystery novel protagonist though, Charlie seems to draw death to her. In so many settings, whether in a cabin, hotel, or raceway, she finds herself involved in many different murder cases from car malfunctions to shootings and stabbings, using her ability to suss out who among the suspects is lying. With a nostalgic tone, it still manages to hit a similar note to Johnson‘s Knives Out franchise, with classic mystery setups combined with a bit of comedy from Lyonne and the litany of well-dressed guest stars. All the while, the connecting theme between episodes seems to be Charlie’s attempts to evade the wolves on her heels.

For Johnson, Poker Face is a departure from his typical mystery fare thanks to its short-form anthology format, but he’s proven time and again to be a master of the genre. He recently struck gold again with his latest Benoit Blanc (Daniel Craig) adventure Glass Onion: A Knives Out Mystery at Netflix which followed the success of his expectation-defying whodunit Knives Out. While Charlie isn’t the professional mystery-solver Blanc is, Johnson is using his experience from the previous films of writing the amateur, accidental detective to make her a compelling character whose abilities thrust her into the role of a super sleuth.

Poker Face sets its first four episodes on the table on January 26 on Peacock with more to follow every Thursday. Check out the trailer below.