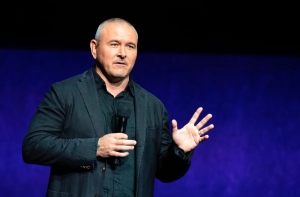 Filmmaker Eli Roth’s latest project, Lionsgate‘s highly anticipated sci-fi film Borderlands, is slated to undergo a series of reshoots. However, when the camera gets rolling again, it will reportedly be under the direction not of Roth, but of director Tim Miller.

According to a report from Deadline, Miller will be stepping into Roth‘s directorial shoes for the reshoots, which are slated to take place over two weeks during an undisclosed period. While there had previously been reports that Roth, who directed the film’s first cut, had been fired from Borderlands, Deadline confirms that he is still very much an ongoing part of the project. Rather, Roth was forced to step away from the reshoots in order to begin production on another film, Thanksgiving. A horror film based on a short trailer that Roth created for Quentin Tarantino and Robert Rodriguez’s Grindhouse, filming on Thanksgiving is reportedly slated to get underway in March, which left Roth no time to handle the reshoots for Borderlands.

While Roth will remain a large creative part of Borderlands, it is unknown what type of spin Miller will put on the project during reshoots. His most famous venture is perhaps his work directing 2016’s smash hit Marvel spinoff Deadpool. The film served as Miller‘s directorial debut, and was notably a comedic and parody-filled take on the superhero genre. Borderlands is described as a “sci-fi action comedy film,” so there will likely be a similarly comedic side to the feature as well.

Based on the popular video game series of the same name, Borderlands will star a massive ensemble cast of Cate Blanchett, Kevin Hart,Jamie Lee Curtis, Jack Black, Édgar Ramirez, Ariana Greenblatt and more. According to a summary from Lionsgate, the film will follow Lilith (Blanchett), an infamous outlaw with a mysterious past, as she returns to her home planet of Pandora to find the missing daughter of the film’s antaongist, Atlas (Ramirez). Along the way, she must team up with a wide cadre of allies, including elite mercenary Roland (Hart), pre-teen demolitionist Tiny Tina (Greenblatt), mad scientist Tannis (Curtis), and wise-ass robot Claptrap (Black) to help find the missing girl.

The quest to get Borderlands made his been a long one, with Lionsgate first boarding the project in 2015. Roth was tapped to direct in 2020, along with Blanchett being cast to topline later that year, and filming commenced in April 2021. In addition to directing, Roth also wrote the screenplay for Borderlands along with Chernobyl showrunner Craig Mazin. The film’s executive producers include Randy Pitchford, the CEO of Borderlands game developer Gearbox Entertainment, and Strauss Zelnick, the CEO of game publisher Take-Two Interactive. Additional producers include Avi and Ari Arad of Arad Productions and Picturestart‘s Erik Feig.

Lionsgate has not yet announced a release date for Borderlands.