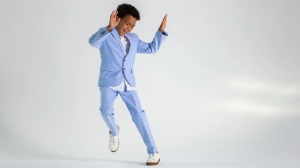 There’s a newish member to the family as Variety reports that Leo Abelo Perry has added his name to the call sheet of Fast X in the role of Dom Toretto’s (Vin Diesel) son, Brian Marcos. When we were first introduced to Brian, he was just a baby who was already finding himself caught up in the action after he and his mother, Elena Neves (Elsa Pataky) were kidnaped by Cipher (Charlize Theron). A blackmailing scheme gone wrong, Brian would be rescued by Owen Shaw (Luke Evans) and Deckard (Jason Statham), although Elena wouldn’t make it out alive. Brian is the namesake of Dom’s best friend, the late Brian O’Conner (Paul Walker), and the last we saw of him in F9, he was living a happy life with his father and stepmom, Lety (Michelle Rodriguez), at their picturesque bucolic home.

Further plot details surrounding what direction Brian will be moving in in the upcoming Fast X have yet to be revealed. Will the youngster follow in the steps of his father, or will he err on the side of caution and leave the high-risk lifestyle for someone else? What we do know is that Louis Leterrier’s Fast X will be bringing back a lot of familiar faces, while also adding some newbies to the cast. The plot’s being kept under wraps, but we know that Jason Mamoa will play Dante, a new villain who teams up with Cipher and that Brie Larson, Daniela Melchior, and Rita Moreno will also be joining the cast.

Most recently, Perry was seen starring in the ABC live special Beauty and the Beast: A 30th Celebration as the adorable Chip. Last year, he made his feature film debut in Disney+’s reboot of Cheaper by the Dozen which starred Zach Braff and Gabrielle Union. He’s also been seen in Kenya Barris’ critically celebrated series Black-ish as well as Liz Heldens’ Fox series The Big Leap.

A busy and full life outside the bustling sets of Hollywood, Perry also heads the group Dance for Justice, a social justice-centered movement that’s raised funds for Black Lives Matter and supported various arts, music, and sports programs. He can also be heard on his activism podcast, The Activators.

The legend continues when Fast X speeds into theaters on May 19.