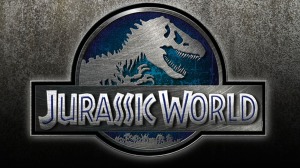 My Take – Who doesn’t love dinosaurs? Whether they are eating people or dancing with you (Barney), these extinct creature who are believed to have lived on our earth million years ago are always fun to watch! The 1993 film directed by Stephen Spielberg based on Michael Christon novel- Jurassic Park bought a huge revolution for Hollywood, other than earning millions (now billion, thanks to the 3D re release) & acclaim all over the world. While its sequels the 1997’s poorly made ‘The Lost Word’ & 2001’s also poorly made yet entertaining on some levels ‘Jurassic Park 3’, provided a closure to the franchise, the 4th film aims to revive our memories as well make new ones for the current generation. Its understandable, that it is hard to keep a franchise going, especially when you’re dealing with dinosaurs walking the earth. You will eventually hit a wall in terms of storytelling if your primary goal is to keep turning these films out with out any care what so ever. We saw that with “Jurassic Park 3” where all the plot points from the previous two films were abandon for a B movie creature feature. Luckily, this sequel was definitely worth the fourteen year wait. It has finally gone back to the basics of the original and stands as a true sequel to the original 1993 Jurassic Park. It’s very action-packed, suspenseful, has the right amount of comedy and some great nostalgia for fans of the original. The story takes place 22 years after the events of Jurassic Park, it has been renamed to Jurassic World and is finally a fully functioning theme park with Dinosaurs, which was John Hammond’s vision. The park is owned by visionary billionaire Simon Masrani (Irrfan Khan) & is managed by Claire (Bryce Dallas Howard). With the visitor rates declining, the board allows Dr. Henry Wu (Yup from the 1st film played by BD Wong) to make a new genetically modified dinosaur called the Indominus Rex. Meanwhile Claire’s nephews Zach (Nick Robinson) and Gray (Ty Simpkins) arrive at the park for vacation.

Then you have Owen Grady (Chris Pratt), an expert at understanding animals. This makes him able to communicate with velociraptors. It also makes him into a hardened protagonist, and a very likable one at that, with his no- nonsense attitude, a brave demeanor, a calm, smart mind, alongside an easygoing personality that makes him outgoing and willing to work with anything and anyone willing to work with him. Well one thing leads to another resulting in total chaos! I am sure you saw that coming. As a standard creature feature, the movie works well and gives you your money’s worth of dinosaurs doing collateral damage to property and personnel with the occasional park visitor being killed for good measure. Throw in your slack jaw good guy (Chris Pratt) who feels that the creatures are misunderstood and works with good guy dinosaurs(I Kidd you not) to help stop the super killer dinosaur. Throw in an human adversary for our hero to fight with (Vincent D”Onofrio) who would blow the whole island up to get this monster and add an human element like two lost children who are related to a employee at this crazy theme park who by the way has the hots for our hero and you have the entire story right there. Yes, It’s predictable in some parts, but I can assure you that it won’t cease to amaze. A movie like this, is the perfect example of what a well-done sequel is, even though the movie ignores the existence of The Lost World and Jurassic Park 3. When the first trailer for Jurassic World was released, way back at the end of November 2014, people were starting to get very worried about the effects in this film and how they will improve from the first film, the same with the use of animatronics in this film. Well my friends and fellow fans, the CGI in this film are brilliant to look at, even though some scenes you can tell it is from a computer scene, the rest you couldn’t tell the difference, they used the animatronics in scenes where they were necessary which has a lot of sentimental value for the film which was a nice touch. Most people thought in this film the Tyrannosaurus would play a minor role like it did in Jurassic Park 3, but the way they utilize the old girl is brilliant, she is amazing to look at and she even has the scars form the fight with the raptors from the first film, you cannot make the T-Rex have a small role in this film, especially when she’s the poster girl for this magnificent franchise. The Indominus is probably the meanest toughest smartest Dinosaur throughout the entire Jurassic Park series. Meanwhile, the plot does what it sets out to do: be an edge of your seat thrill ride, and believe me, I WAS on the edge of my seat with this film. I’ll even go as far as to say that this may just be one of the scariest movies I have seen in a long time. Like said, the Indominus was terrifying, there were gruesome deaths. However, what I also love is that it doesn’t just make itself terrifying, but you get to see how dinosaurs talk to each other and even get to feel for some of the dinosaurs, from the gentle giant apatosaurus to the trained raptors to even the T- Rex! 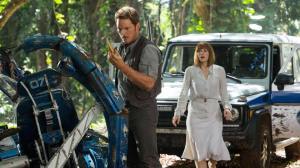 The dinos, especially the raptor attacks, are superb. The dinos look great, thanks to Ed Verreaux’s production design. Cinematography by John Schwartzman is excellent and provides several iconic moments sure to appear on posters and memes. Music, though featuring additional tunes by Michael Giacchino is basically variations on John Williams memorable score. The characters stand out for they personality and it’s quite impressive the way they connect through-out the movie run- time. The characters in this story are considerably more three-dimensional than in the previous films, especially the leading lady Claire, who undergoes an unexpected and satisfying character journey from corporate dingbat to war-torn survivalist. Bryce Dallas Howard’s character breaks the conventions of a female character in a film of this genre, she takes control of situations and you feel that she isn’t a girl to run away from danger…apart from running away from the Indominous Rex, which I don’t blame anyone for doing so. Chris Pratt’s character Owen Grady is the perfect blend of Alan Grant and Ian Malcolm, making him likable and very quirky in how he behaves around his Velociraptors and people in general. The supporting characters in the film also help it to come alive and make you think this is a real park with real lives at risk, especially Irrfan Khan (who is always awesome) & Vincent D’Onfario in his role, he plays it magnificently and you can feel his tension yourself and finally Nick Robinson and Ty Simpkins as the kids in peril aren’t as annoying as Kelly in the lost world, so that’s an improvement to take note for. On the whole, ‘Jurassic World’ is the sequel ‘Jurassic Park deserved! The film brings the series back to where it belongs. You can watch the first one, skip the second and third, and jump straight to this one and have a better franchise. I do so love it when a movie series returns to its creative roots. Jurassic Park was an epic film, and then Spielberg and company found a way to destroy its flavor with two banal sequels. After a lengthy hiatus that included much soul-searching, and dumping Jack Horner, Jurassic World brings the franchise back to the wonderfulness of the original. Watch it in 3D or like me in 4D!! Its worth it!!