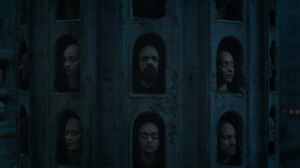 At long last my friends, here is the trailer for Game of Thrones Season 6. But the overall impression is that this season is going to feature a ton of positioning for battle, with what seems like some decent payoff. What’s clear is that no one’s position is safe within the realm, and alliances and power structures are going to be quickly shifting.

The trailer’s folksy ballad (“Wicked Game” performed by James Vincent McMorrow) doesn’t seem like quite the right touch, and diminishes the epic nature of everything being shown visually. Still, with all of the build-up, speculation, and uncertainty regarding this coming season, it’s hard to douse those fires completely. And as the trailer shows, there is a lot of fire. And blood. Check it out below:

So let’s break this thing down:

Stark: Firstly, Davos tells us (again, everybody shut up already!) that Jon Snow is gone. Ok, sure, whatever. But later in the trailer we not only see Melisandre (in a crisis of faith) and Davos conspiring, but Davos about to chop off Jon Snow’s head, with Ghost (finally, where have you been??) seeming to guard him. Across the Narrow Sea, Arya is getting beaten up on in the House of the Undying, and appears to still be blind. Bran (who we haven’t seen in a season) in north of the Wall, and confronting the Night’s King — but is it real, or a green dream, or something he sees in the Weirwood? Finally, we see Sansa — who has evidently survived the jump — looking a little like her Dark Sansa self … let’s hope she gets some agency this season.

Lannister: You can’t keep a Lannister down for long, and Cersei is already conspiring again with Jaime to take back their power (and there seems to be a little hanky panky going along with that, too). She was humiliated last season by the High Sparrow, whose revolutionaries took control of King’s Landing, but it looks like it’s not going to take Cersei long to get back into the seat of power (she looks much more cleaned-up by the end of the trailer). As she goes against Lancel, it also appears she has a new alley to fight with … is that the reanimated monster that she and Qyburn were working on creating who stands behind her when she says she chooses violence? There was also a quick glimpse of Tyrion, although not much to go on at this point. How safe is he now that Dany is gone?

Greyjoy: Season 6 seems like it will be giving a little more time to the Greyjoys, several of whom TV audiences haven’t met yet. The trailer gave us glimpses of Theon, Yara (kissing a girl?) and a baptism of perhaps Viserion (or Euron?) to the Drowned God, as well as some sea battles and more. Except some major time spent Not Sowing in Pyke this season.

Baratheon: We didn’t see much of King Tommen (long may he reign), and it’s uncertain who is really controlling him now. We did get a quick shot of Margaery though, looking beaten down (the High Sparrow brought her down last season, too), but then it appears they have some reconciliation. Watch this space.

Targaryen: Dany has built herself up only to be torn down again, being dumped off in the wilderness by her dragon, Drogon, and then picked up again by the Dothraki horde. Stripped of her power and prestige, we’ll see what happens to her next, though it looks like Jorah is picking up her jewelry breadcrumbs pretty well.

Bolton: The trailer suggests that we’re going to see a flayed man on fire, which is about as Bolton as you can get. But the family whose fortunes seemed to be on the rise appear to be facing more foes this year, as most of the trailer’s battle sequences feature them in the field (and in one scene, breaking into something … a crypt?) and having to defend their (new) home of Winterfell. (And what is Tormund doing there?)

Martells: Conspicuously absent. Not that they were a great addition to Season 5, but one would still expect something with them. Nothing trailer-worthy though, apparently.