Synopsis – A failed American sales rep looks to recoup his losses by traveling to Saudi Arabia and selling his company’s product to a wealthy monarch.

My Take – There is no doubt that Tom Hanks is one of the most likable & bankable film stars of the world, especially considering his career graph, a film starring Tom Hanks can seldom be bad. However, this cross cultured comedy drama is not among those. Don’t get me wrong, Tom Hanks is great here, possibly the only reason the film is eminently watchable, but its hard to deny that film any lacked a sense of direction. I am still not sure what this film was trying to achieve. Was it humor, drama, angst, sadness, happiness, or some combination of the above? As the end credits rolled in, I just felt lost. Here, director Tom Tykwer tackles the familiar “fish out of water” theme of an American being in unfamiliar territory and culture with his own touch by establishing some sort of whimsical rhythm to the story, to draw humor out of the monotonous, and to utilize Hanks‘ acting chops in a manner similar to Wes Anderson‘s Grand Budapest Hotel with Ralph Fiennes. However, where as Wes Anderson handles such a film with the delicate and meticulous approach of a true artist, director Tykwer missed his mark entirely, and the whole film played with a sense of directorial and writing laziness. There were at least three times when it seemed like an entire scene (possibly an entire reel) was missing, completely edited from the final cut, which gave the film a choppy feeling, like the studio had heavily (and poorly) edited the film prior to release. This fish-out-of-water-into-the-desert story follows a template similar to Bill Murray‘s 2015 Rock the Kasbah (which was more fun) and Tina Fey‘s 2016 Whiskey Tango Foxtrot (which was funnier). Those films were marginally enjoyable, but this one is less so.

Based on author Dave Eggers‘ best-selling novel, the story follows Alan Clay (Tom Hanks), a washed-up, put-upon Boston corporate salesman on a business trip to Saudi Arabia. Alan’s father (Tom Skeritt) criticizes him, his ex-wife (Jane Perry) hounds him and his college-aged daughter Kit (Tracey Fairaway) is caught in the middle. Alan’s boss (Eric Myers) belittles him and makes unreasonable demands, like the exact time when the ruler of a Muslim country will sit down for a tech presentation. Sent to Saudi Arabia with a 3-person tech team from his company, to sell the Saudi king a video teleconferencing system which features a hologram of the person on the other end of the call. The king is building a new business center out in the desert and Alan’s team is in the exhibition hall waiting to hear when the king will stop by. The exhibition hall is a nearby tent where the air conditioning only works some of the time, the Wi-Fi doesn’t work at all and there is no food. Alan’s repeated trips over to the business center to find solutions are met with indifference and Alan grows increasingly frustrated. Personally, Alan is having a hard time adjusting to his new surroundings – in every way imaginable. He gets some help with the obvious culture shock from his driver, Yousef (Alexander Black), a Saudi national who once lived in the U.S., orients Alan to the culture and provides the film’s comic relief. Alan also has problems with oversleeping, finding a drink in a country where alcohol is officially banned and is occupied with concern about a mysterious new growth in the middle of his back. For that first one, he has Yousef, for the second, a very friendly Danish businesswoman (Sidse Babett Knudsen) and for the third, a female doctor (Sarita Choudhury), with whom he would like to become friendlier.  I thought the first hour of the film worked really well, and reminded me somehow in a general of Sofia Coppola’s “Lost in Translation”. The film falters when the (inevitable?) potential romantic interest develops between the Tom Hanks character and his doctor (yes, a female doctor in Saudi Arabia!). when he develops a bad cyst on his back. Honestly, I was really looking forward to seeing this film, partly because I like Tom Hanks and partly because of the quirky Talking Heads “Once in a Lifetime” rendition in the trailer (which actually opens the film, and is great – I loved it). Scenes that made the greatest impression on me is when Alan makes a joke to a Arabic man while walking on a long stretch a highway that is surrounded by sand and dust., and that joke gets him in great trouble. Another scene where Alan has the opportunity to kill a wolf in clear view and questions whether to shoot or not is something that he struggles with. And scenes where Alan takes matters into his own hands but trying to cut way that mysterious large bump on his back; leads to disastrous results. There also a scene late in the film where Alan and Zahra and goes on a memorable swim in the ocean that leaves and indelible mark with the couple. There are also a host of enjoyable episodic plot elements set against spectacular Arabian vistas that are memorable. However, that is all they are – episodes. Unfortunately, the whole film is a jumble of tidbits that never gel into any sort of satisfactory story arc: We have an “infidel in the middle of Mecca” scene, that suddenly ends without event or note; We head off on a wolf hunt that subsides into nothing: perhaps the denouement was supposed to mean something deep and meaningful, I guess; Even the main storyline tends to fizzle out to be replaced with an aquatic-based sub-story of inter-racial love. True that this romance is both touching and well done, but it feels entirely bolted on at the point you expect the film to end – it really doesn’t integrate well. 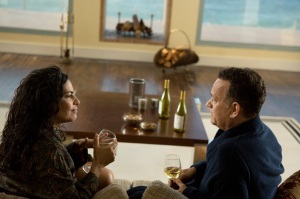 The formulaic elements of this film were evident throughout. 1) Pressure at work for Clay so we feel some sort of deadline. 2) Daughter’s tuition bills (because apparently the only way she can go to college is if he pays out of pocket) so we know the stakes are high. 3) Health concerns for Clay, which I initially thought would be some sort of personal dilemma situation, but turned out to just be a device to get him to meet the love interest. 4) unlikely cross-cultural romance develops. 5) The actual titular “hologram” turns out to not even be important, is really only one scene of the film, and even after the big IT pitch ultimately fails, we see that nothing particularly (or remotely) bad happens. The repeated waking up late, showering, and getting in the old car with his driver, and ultimately achieving nothing at the presentation site – became very taxing. There was no element of “can you believe this is happening again” instead, as Clay goes out and parties the night before, I just began to roll my eyes as the inevitability of this time filling sequence looms. Although the script was witty and quite funny in places, I didn’t really see the point of the project, and the rest of the cast was a bit weak. I liked the banter and chemistry between Alan and the taxi driver but the sex scenes looked uncomfortable and it seemed to jump from a funny business storyline, to a love story. When making a film either about a different period or a location, some basic criteria has to be considered like local aesthetics, customs & traditions, understanding how local people behave, talk etc. This one shows a complete disregard of this research and all characters are played by Hollywood contemporary and veteran actors. The protagonist doesn’t even struggle with the language difference shows the level of understanding the script has on the location where the primary language of Saudi Arabia is Arabic. The receptionist, cabbie, doctor, his contact for arranging his presentation – all speak fluent English. Their local problems are very similar to the American white problems which is incomprehensible considering the huge cultural difference. The purpose of why the protagonist visits Saudi Arabia is shown in the first and last scene – no wonder he is a not so successful sales representative. The character Zahra of a female doctor in Saudi Arabia is one of the most ridiculously written characters I have come across. The film is definitely very quirky and strange, and I love quirky and strange. It’s also very slow-paced, meandering and uninvolving though. Tom Hanks does his best in the lead to work with what he was given, and I the only marks I hold against him are for taking a film with the potential to go so wrong given the generally uninteresting script. Hanks looks fantastic and he just gives a very subtle and real performance like he does best. Sarita Choudhury is very good. She has a certain mysterious quality to her and her and Hanks have very good chemistry. Alexander Black in a wonderful in the comedic sidekick role (I could have watched a whole film with Black and Hanks together), Tracey Fairaway, Ben Whishaw, David Menkin, and Christy Meyer although they really don’t get much screen time and their characters are strictly there for Hanks‘ development. On the whole, ‘A Hologram for the King’ is a disappointing affair which despite the presence of Tom Hanks doesn’t work due to its uninspired screenplay & unhinged direction.