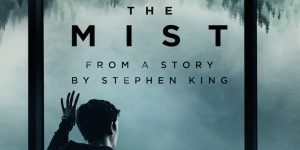 Frank Darabont’s adaptation of The Mist is one of the most upsetting and powerful horror films I’ve ever seen. While it didn’t become a massive hit like other Stephen King adaptations, it’s a deeply disturbing movie that goes far beyond the supernatural element to highlight the human horror that’s always present.

Now Spike is trying to turn The Mist into a TV series, and they’ve released a new trailer for the show. For those unfamiliar with King’s novella or Darabont’s 2007 film, the story focuses on a small town that’s enveloped by a mysterious mist that’s filled with monsters. However, the supernatural event ends up bringing out the monstrosity of the townspeople.

The story definitely works within the confines of a movie, but I’m curious to see how Spike plans to maintain it over the course of a series. Is it going to be like The Walking Dead where characters are basically, “Yeah, we just live with this supernatural evil now. Life’s tough,” or is there a way past the mist? Will the show lose its sense of claustrophobia if it has to keep coming up with new stories week after week (something that was a serious problem for another King adaptation, Under the Dome)?

Here’s the official synopsis for The Mist:

Based on a story by Stephen King, Spike’s THE MIST centers around a small town family that is torn apart by a brutal crime. As they deal with the fallout an eerie mist rolls in, suddenly cutting them off from the rest of the world and, in some cases, each other. Family, friends and adversaries become strange bedfellows, battling the mysterious mist and its threats, fighting to maintain morality and sanity as the rules of society break down. THE MIST stars Morgan Spector, Alyssa Sutherland, Gus Birney, Danica Curcic, Okezie Morro, Luke Cosgrove, Darren Pettie, Russell Posner, Dan Butler, Isiah Whitlock Jr., and Frances Conroy.