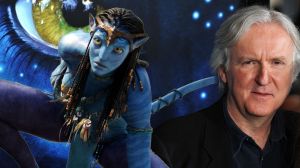 It’s been nearly nine years since a James Cameron film graced cinemas (2009’s Avatar), the longest stretch since the auteur blasted onto the scene and forever changed the science fiction landscape with The Terminator. But this absence isn’t due to any sabbatical – Cameron’s actually been hard at work on a series of mysterious Avatar sequels (four in total) and an equally enigmatic Terminator reboot. At the press day for Cameron’s upcoming six-part docu-series James Cameron’s Story of Science Fiction, the filmmaker briefly touched upon his long in the works Avatar sequels and his planned reboot of The Terminator franchise.

On Avatar 2 and Avatar 3: Cameron revealed that he’s about “one-hundred” days into production on the sequels – both of which are shooting concurrently. “In terms of the story we’re telling…” Cameron confided, “I’ve found myself as a father of five starting to think about what would an Avatar story be like if it was a family drama. What if it was The Godfather? So that’s what [the Avatar sequels are]  – it’s a generational family saga. That’s very different than the first film. There’s still the same setting and the same respect for the ‘shock of the new’. We still want to show you things that you haven’t even seen or imagined, but the story is very different. It’s a continuation of the same characters… but what happens when warriors who are willing to go on suicide charges and leap off cliffs, what happens when they grow up and have their own kids? It becomes a very different story. Now the kids are the risk takers and the change makers…”

Cameron stated that although he hasn’t done any production work on Avatar 4 and Avatar 5, he still knows “the story through the end of five, where it’s all going. We’ve done most of the design work though – so we know what the characters and the creatures and the location design look like… I’m personally committed to all of them.”

In addition, for those who visit Pandora at Disney World, pay close attention – as per Cameron – “new creatures from the sequels” are peppered throughout the park.

As for Cameron’s planned The Terminator reboot: He confessed that he had to take a more nuanced approach to reflect our present day reality. Per Cameron:

“We’re developing a new Terminator film. And The Terminator films are all about artificial intelligence. But I would say we’re looking at it differently than when I wrote the first story in 1982. That was just your classic ‘technology bad, smart computers bad’ kind of thing. Nowadays though – it’s got to be a much more nuanced perspective. So its ‘Smart computers bad… BUT…’ That’s the new motif.”