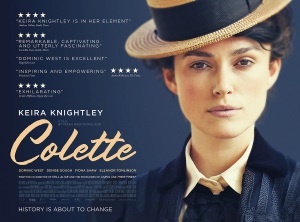 Synopsis – Colette is pushed by her husband to write novels under his name. Upon their success, she fights to make her talents known, challenging gender norms.

My Take – History buffs would agree that Sidonie-Gabrielle Colette or just Colette was probably the most important woman writer in the history of French literature, and the private, personal story of who she really was and how she got there is as mesmerizing and all-consuming as any book she ever published. Her first four novels—the Claudine series, about a French girl’s coming-of-age—were released back in 1900s to acclaim and mild scandal, especially among the Parisian elite. Yet she couldn’t reap the rewards because her work was published under Willy, the pen name of her husband, the publisher and all-around rake Henry Gauthier-Villars. Eventually she did get to publish many novels under her own name, successfully sued for co-authorship of the Claudine series, and was also nominated for the Nobel Prize in Literature.

Although it happened more than 100 years ago, the story of how she became a gay icon of artistic achievement in the world of letters as well as a symbol of freedom and power in a male-dominated world has a relevance for today’s feminist movement that is astonishing.

Coming to the film, while British produced period films often end up lacking substance, mainly due to their favor-ism over just flaunt their style, location, and costume design, here, director Wash Westmoreland (Still Alice) and co-writer Richard Glatzer, end up bringing in something different to the table by providing an enlightening look into the life of an author I knew very little about.

Personally, I ended up being pleasantly surprised with the film and how interesting it was. And by casting Keira Knightley in the title role, who has built her career around costume dramas, this biopic ended up becoming (for me) the best and most lavishly appointed, gorgeously photographed period film I have seen in years.

­­­­­­­­­­­­­­­­­­­­The story follows Sidonie-Gabrielle Colette (Keira Knightley), a beautiful young but poor French country girl who lived in Burgundy in the late 1890s. Without any sort of ambitious craving to be somebody, and without a dowry to her name, Colette catches the eye of Henry Gauthier-Villars (Dominic West), a well-known French writer and critic better known by his pen name, Willy and the two quickly fall in love. The forceful and boisterous man, 14 years her senior, brings Colette to Paris, where she is deeply nauseated by his high-society friends and lifestyle. Even though she sound finds out that Willy is not only pompous but also quite unfaithful, she remains by his side.

However her biggest shock comes when she finds out that her husband is also a literary fraud whose only talent was to convince other people to ghostwrite his stories. When his gambling debts and financial conditions cause the other writers to leave, Willy convinces Colette to write a fictional account of her memoirs in the form of a bright, ornate novel titled Claudine at School, based upon her childhood in the countryside. With some polishing from Willy himself, upon release the book becomes a nationwide phenomenon, but all under Willy’s name.

Now financially afloat, Willy forces Colette to keep turning out more stories for Claudine in order to continue their success. However, with the appearance of Georgie Raoul-Duval (Eleanor Tomlinson), an American who married a rich but old businessman in France and Mathilde de Morny aka Missy (Denise Gough), a French noblewoman and artist, in their lives, complications begin to arise. Thus begins the power struggle over Claudine’s ownership and that of Colette’s very identity.

From the synopsis you may notice a certain similarity to Tim Burton’s Big Eyes (2014). With the main similarities being of the woman in question robbed of her work by her own husband. It’s the same case here where the woman is essentially working for her husband. She thinks she’s a partner, but she soon realizes that instead her work is being basically stolen. Big Eyes didn’t make much of an impact in terms of awards or box office, but because this Knightley film is coming out in the wake of Time’s Up, maybe it will have more of an impact. It helps that this film is a bit more entertaining, nuanced and is dealing with more interesting or compelling issues, as the story line veers into homosexuality, adultery, transgender relationships, and more.

The film also has a subtle and sly humor, with set designs and costumes all made to breath into the would be authenticity of Paris of that time. Each setting and costume change only seeks to nurture Colette’s own self-realization and development as an artist. I especially liked the Egyptian stage performance scene. The film breathes the embodiment of its time: the style, the class, the debauchery, the seduction, it’s all there and established well. Despite the film’s greatest strength being how it presents women as complex and whole as, in themselves, worthy of praise and fury and exploration, as with any biopic about writers or painters, it’s difficult to dramatize this type of character, especially in terms of presenting things visually on the screen.

So the film’s scenarists were forced to focus on the relatively short-lived relationship between Colette and her philandering husband. Initially, Willy refuses to take “Claudine” seriously. He calls the story “too feminine” and says it lacks a plot. Indeed, he only agrees to submit it to publishers under financial duress, after instructing Colette to sprinkle in some sexual longing: “more spice, less literature.” But things change when the book takes Paris by storm—and finds a devout readership among young women. 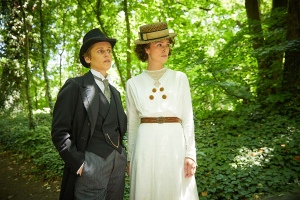 The role the series comes to play as a proxy for her own life, and particularly her relationship with her husband, is one of the film’s neatest narrative tricks: We learn the outcomes of real confrontations as they’re being edited for use in the next Claudine. When Willy suggests a line of dialogue that would paint his fictional stand-in, Renaud, in a better light, Colette replies that she doesn’t think Claudine would believe him. Then, airily: “I’m planning on killing Renaud off in the next one.”

Much of the Willy-Colette interactions are fascinating as we see how Willy takes all the credit for the Claudine novels-coming of age tales about a French teenage girl-almost exclusively written by Colette. But this not where Willy-Colette get interesting, but it’s when their sexual desires come into question, the film moves towards an unexpected path. Even though Willy is a womanizer with a convincing, infuriating self-assuredness, he is more pathetic than endearing. But his moments serve the larger purpose of painting a realistic portrait of their toxic marriage. While Colette’s extramarital relationships are similarly nuanced. She embraces her fluid sexuality and engages in lesbian relationships that do not feel exploitative, or simply thrown in for dramatic effect.

An affair with the wife of a Louisiana tycoon which begins as a one of thing but later devolves into separate affairs highlighting Willy and Colette’s libertine ways. When Colette discovers this and confronts him, he encourages her to have her own affairs, especially after she expresses same-sex attraction toward women. The film doesn’t dive into it too much, but there is a question of what one considers betrayal or infidelity, particularly within the confines of marriage. Willy doesn’t see Colette’s affair as infidelity if it doesn’t cross gender lines, and she never pushes back on him saying that it’s only OK if he only has sex with boys. They pretty much evolve into an open marriage wherein the only betrayal is lying. However it is the business affairs however that eventually lead to the breakup of the pair as Willy sells the rights to all the Claudine novels without informing Colette, which causes her to walk out on him for good.

However certain factors let the film a bit down. In apparent eagerness to convey the film’s self-appointed message of empowerment, the characters are thrown unnecessarily obvious lines and gestures — most of all, Colette herself. Colette is an empowering figure, and it’s refreshing to see a woman who’s aware of her own strength. But Colette’s story of self-creation is powerful on its own, and only serves to be undermined by clichés and repetitive dialogue, for example, when Colette becomes a mime and stage actress, she declares, “I will continue to pursue this because I want to” — a scene tailor-made for awards show montages. In the film’s climactic moment, Colette proclaims: “I am the real Claudine.” But we already knew that. Even her relationship with Missy, a masculine-dressing lesbian, who was the niece of Napoleon III, seemed underdeveloped.

As the title character, Keira Knightley is tremendous and beyond lovely. I don’t think she can do a bad performance. She lives and breathes every part of Colette. Dominic West, too, is absolutely grand. While the controlling husband can be an easy villain, but West’s layered performance holds your gaze. In supporting roles, Eleanor Tomlinson, Fiona Shaw, Robert Pugh and Denise Gough are also good. On the whole, ‘Colette’ is a compelling biopic which despite some misgivings offers a breezy and entertaining look into the life of a literally icon.