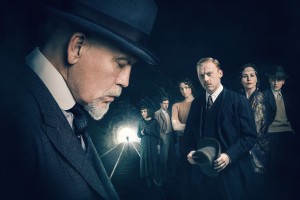 Amazon Prime Video has released the first trailer for the Agatha Christie adaptation The ABC Murders, giving us a look at John Malkovich as iconic detective Hercule Poirot. This is the second of three planned limited series adaptations of classic Christie books, with the first being The Ordeal of Innocence that was released this past October and starred Bill Nighy.

The ABC Murders is set in 1933 and follows a killer who travels the length of Britain via railway, leaving a trail of bodies behind that follow the pattern of the alphabet. Sarah Phelps (The Casual Vacancy) wrote and executive produced the three-episode adaptation, which is directed by Alex Gabassi. It looks pretty fine, albeit a bit glum. Obviously Kenneth Branagh has his own Hercule Poirot on the big screen with his Murder on the Orient Express follow-up Death on the Nile set for release in October 2020, but Malkovich no doubt puts his own spin on the iconic character here.

Check out the ABC Murders trailer below. The limited series also stars Rupert Grint, Andrew Buchan, Anya Chalotra, Eamon Farren, Jack Farthing, Tara Fitzgerald, Shirley Henderson, Bronwyn James, Freya Mavor, and Michael Shaeffer. The ABC Murders is produced by Mammoth Sceen and Agatha Christie Limited for BBC One in the UK and will be released on Amazon Prime Video in the US on February 1, 2019.

Here’s the official synopsis for The ABC Murders:

It’s 1933 and a killer travels the length and breadth of Britain via the railway network. The killer uses the alias ABC, and strikes in a methodical pattern, leaving a copy of the ABC railway guide at the scene of each of murder. As Poirot (John Malkovich) attempts to investigate he is thwarted on every front. If he is to match his most cunning nemesis, everything about him will be called into question: his authority, his integrity, his identity.

One response to “‘The ABC Murders’ Trailer : John Malkovich Is Hercule Poirot in Amazon’s Limited Series!! Check It Out!!”