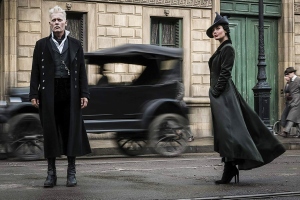 Although J.K. Rowling spoke out strongly in support of Johnny Depp prior to the release of Fantastic Beasts: The Crimes of Grindelwald, rumors are circulating that Warner Bros. executives are becoming increasingly concerned about Depp’s continued involvement in the franchise.

Depp has been embroiled in a bitter legal battle with his ex-wife Amber Heard, the actor recently launching a $50 million defamation suit against the Aquaman actress claiming that her allegations of domestic abuse were false, and an effort to advance her own career.

According to Page Six (via Dark Horizons), high level studio executives are worried that the continuing media coverage of the allegations will send the wrong message to the public, especially as the studio has recently been in the spotlight due to the sexual misconduct scandal which led to the departure of former CEO Kevin Tsujihara.

In Depp’s suit against Heard, the actor has alleged that Heard’s accusations already cost him several roles, including that of Captain Jack Sparrow in Disney’s Pirates of the Caribbean series, with the House of Mouse opting to reboot the series for the sixth installment. Whether we’ll soon be able to add Gellert Grindelwald to this list remains to be seen.