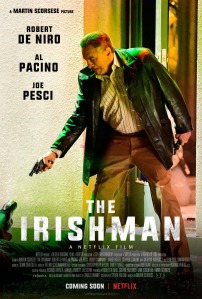 Production on Martin Scorsese’s hugely anticipated The Irishman began way back in 2016, so we’re used to waiting around for this much ballyhooed reunion of the Oscar winning director and his big-hitting collaborators, Robert De Niro, Joe Pesci, and Harvey Keitel. Well, we’re going to have to tough it out for slightly longer, because Scorsese has revealed in a conversation with Joanna Hogg on the The Bigger Picture Podcast that the digitial “youthification” process needs more work.

The legendary director revealed that the de-aging process appeared to be altering the look in the actor’s eyes, which was then changing the feel of the performance. Scorsese told Hogg they’d “shot as much 35 as possible. However, there’s a great deal of CGI because we’re doing this youthification of De Niro, Pesci, and Al Pacino. They had to be CGI. They had to be a camera with three lenses. I was just crazy.” He goes on to give more specific details about the process, saying that “certain shots need more work on the eyes, need more work on why these exactly the same eyes from the plate shot, but the wrinkles and things have changed. Does it change the eyes at all? If that’s the case, what was in the eyes that I liked? Was it intensity? Was it gravitas? Was it threat?”

Always the most challenging aspect of the process, when you get the eyes right it results in Robert Downey Jr. in Captain America: Civil War, but when it goes horribly wrong, you’re in Rogue One territory. So it makes sense, especially for a cinematic perfectionist like Scorsese, that they take the time to get things right.