Synopsis – Merricat, Constance and their Uncle Julian live in isolation after experiencing a family tragedy six years earlier. When cousin Charles arrives to steal the family fortune, he also threatens a dark secret they’ve been hiding.

My Take – One of the best things to come out of the success of Netflix‘s 2018 miniseries ‘The Haunting of Hill House’ is that it seems to have re-piqued filmmaker’s interest in the works of the literary genius author Shirley Jackson. Between this film and an upcoming feature-length take on her short story, ‘The Lottery’, the late author is in vogue and as a fan I couldn’t be happier.

Her works are complicated but haunting, even when they aren’t necessarily meant to be horrific. Based on the 1962 novel (her last) of the same name, here, this Stacie Passon directed and Mark Kruger written film, takes on the challenge to bring a big-screen adaptation that hews close to her spooky, paranoid and distinctly horror genius female energy.

Honestly, having never read the novel, I can’t judge how this filmed version works in comparison, but hopefully the book is better, because the feature adaption lacks the tension that is presumably supposed to be here. Sure, the acting is great, production is spot on and the overall feel is there, but the main problem, however, lies in its story, which simply isn’t very interesting.

It seemed like in an effort to deliver the message of the importance of feminism, the events in the film end up feeling underdeveloped, hollow and rushed. Also, despite being promoted as a straight up horror film, it plays out more like a no scares gothic drama that eats itself from the inside. If you’re a fan of Shirley Jackson, by all means check this out as her son served as co-executive producer. Just don’t expect the shock value you would usually expect from her work.

Set in 1960, in a small town in America, the story follows Merricat Blackwood (Taissa Farmiga), an 18-year-old girl, who lives with her older sister Constance (Alexandra Daddario) and her ailing uncle Julian (Crispin Glover) in a well-kept, isolated mansion on the edge of the town. Following a family tragedy six years earlier, Constance hasn’t left their property in the intervening period since she was tried and acquitted of the poisoning death of her parents and Julian’s wife; Julian was also poisoned, but managed to survive.

As the residents of the town are convinced that she got away with murder, they keep harassing Merricat whenever she goes to town for shopping, resulting in her to practice her own form of protective magic as a means of keeping harmful forces at bay, even though they don’t appear to accomplish much. However things begin to get worse with the arrival of their charming cousin, Charles (Sebastian Stan), who clearly seems to have his sights on Constance and the family’s fortune hidden in a safe, which leads to an entire shift in the family dynamics.

As with most mystery films in modern cinema the intrigue which captures an audience’s attention lies in a film-makers ability to sustain and unravel a plot sufficiently over the duration of a film. And you can see that care was put into the film but the problem is that there is so much thrown around and so many breadcrumbs dropped that you can become confused about the actual film you’re watching. While complex isn’t inherently bad, it’s the lack of resolution that becomes the roadblock.

One of the first things you’ll notice is the pacing. The run time is just 96 minutes, but it still feels far too long. There is far too little conflict in the beginning of the film, so you begin to wish that they would have cut some of this less useful material in favor of exploring some of the more interesting material that comes up later. When the conflict actually begins, it happens so quickly that there isn’t really enough time for you to be affected by it.

Another biggest issue with this film is that it believes itself to be so much more than it actually is. The tone of the film is where it has most of its intrigue, as it leave us pondering how equipped we are to handle human cruelty, both in enduring it, and in our capacity to forgive. Do we isolate ourselves or do we try to push forward? Or do we completely unravel and seek revenge or play out our hurt and rage until it has been avenged? These are questions this film will leave you pondering, and of course much depends on our lot in life, our finances, our social support, our inner strength and many other factors. But it often didn’t succeed at sustaining what it builds. 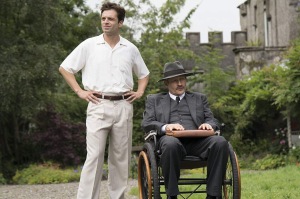 Also without the much needed creeping dread and gestating terror, the film just doesn’t work, at least not in the way it’s supposed to. Mainly because it’s so dependent on the inner mindsets of the characters. The talented cast help to buoy the narrative’s aimless and repetitive middle portion, but because we never really get a sense of who these characters are, or what motivates and defines them, we also never really manage to care what happens to any of them. The film raises lots of interesting ideas but never bothers to address them.

The film also needed to have quite a bit more character development. Although the point of the story is that the protagonist is weird and cold, the film goes even further than that and makes her unapproachable. For the film to have been successful, she needed to be compelling despite the fact that she behaves in an odd manner. The film was unable to find this balance. Additionally, the film’s supporting characters are completely underdeveloped. This could have provided another outlet through which audiences could have connected with the film.

However, the film succeeds on a technical level. The visuals in the film are quite good, especially given the fact that this is a period piece without a huge Hollywood-sized budget. The production design is excellent, being the main tool used by the film to create that gothic tone and feel that is important to the story and film as a whole. Also helping the tone is the cinematography, which is often quite beautiful.

Also the cast is mostly solid. Taissa Farmiga successfully manages to embody the character of Merricat, from the line delivery to the awkward and insane mannerism, while Alexandra Daddario puts forward her best performance yet. The underrated Crispin Glover once again manages to be put on another fantastic performance while Sebastian Stan steals the show in every scene he is present. On the whole, ‘We Have Always Lived in the Castle’ is technical fit and well-acted but is let down by its abysmal story telling.