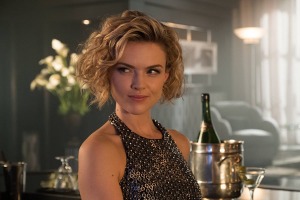 Written by Aguirre-Sacasa and directed by Maggie Kiley, The Brides, a sexy contemporary reimagining of Dracula, is a family drama with a trio of powerful female leads at its heart — Cleo (Torres), Renée (Richards), and Lily (Reis). With strong horror elements, The Brides is a vampire soap about empowered, immortal women and the things they do to maintain wealth, prestige, legacy — and their nontraditional family.

Richards’ Renee is the head of a top modeling agency in New York City, known for her torrid affairs with her beautiful female models. In her former life, she was the wife of the Marquis de Sade when she invited Dracula (Goran Višnjić) into her “house of pain” and asked to be “turned” by him.

Aguirre-Sacasa, Berlanti Prods’ Berlanti and Sarah Schechter and Kiley executive produce. The Brides is produced by Berlanti Prods in association with WBTV and ABC Studios, part of Disney TV Studios.

The Brides brings Richards back into the Warner Bros. TV fold after she co-starred as Barbara Kean on the studio’s Fox drama series Gotham for its entire five-season run. She also got into the Warner Brothers Directors Program and has helmed episodes of two WBTV shows: the 100th episode of Gotham and a recent episode of God Friended Me.

Richardson wrote, directed and starred in the short film Hot Girl, which won the NY Lift off Film festival. She starred and directed her second short film, Got It, which is making the festival circuit rounds. The Wales native, who also co-starred on the Fox comedy series Breaking In, is repped by Magnolia Entertainment in the U.S. and Curtis Brown in the UK.