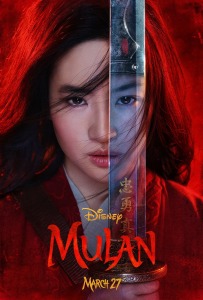 Disney announced a slew of new release dates today, most of which were due to the delays caused by coronavirus concerns. Among them is a brand new release date for Mulan, which was originally due to open in March but was abruptly pulled from the release calendar when movie theaters across the globe shut down.

Disney has now set a new Mulan release date for July 24, 2020. Which, well, is still a bit iffy. U.S. theaters shuttered in mid-March with the hope of opening back up in “six to twelve weeks.” But most of the films scheduled to open in May and June of this year have now been pushed back to the fall or later, as the coronavirus continues to bring any and all public gatherings to a halt. And the slow pace with which the U.S. is closing down and enacting “shelter at home” orders likely means this thing won’t be over anytime soon.

Right now, Warner Bros. remains confident (publicly at least) that Christopher Nolan’s new film Tenet will still open in July, and perhaps that unwillingness to flinch is why Disney chose July for Mulan. But the possibility remains that if things are markedly better by mid-June, the release date for Mulan could be pushed back even further. Another hitch is the prospect that even when we have the all-clear health-wise, the economic pressure put on theater chains like AMC may result in some permanent closures. TL;DR how many movie theaters will be able to reopen by July in time for Disney’s latest live-action remake, even if the health concerns have dissipated?

There are a number of unknowns to consider, but right now Disney has reworked its entire 2020 and 2021 calendar—including a slew of Marvel movies—to what it clearly hopes will be more amenable to reality. But no one can predict with absolute certainly when these social distancing measures will be over, so while it’s nice to see Mulan has a new release date, I’m not quite confident enough to believe that July date will for sure stick.