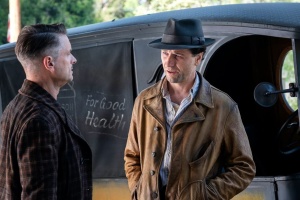 HBO has released the full trailer for Perry Mason, a remake of the classic legal drama with Emmy-winner Matthew Rhys taking over the title role. Set during a Great Depression-era Los Angeles where Evangelical fervor is heating up and talkies are still making people faint in the aisles, the series will see the iconic defense lawyer taking on a kidnapping gone horribly wrong.

Put Matthew Rhys in a shabby trenchcoat and wide-brimmed hat and you’ve pretty much got my attention right off the bat, but this actually looks great. I’m not sure how many people were clamoring for a new Perry Mason, but this trailer smartly highlights the twisting mystery element and the genuinely stacked cast doing their thing. Tatiana Maslany playing a radical preacher embroiled in a massive city-wide conspiracy? Count me all the way in. Plus, the show literally looks great, proving once again that HBO has consistently put out the most cinematic-looking TV of the last few years.

Here is the official synopsis for HBO’s Perry Mason:

1931, Los Angeles. While the rest of the country struggles through the Great Depression, this city is booming! Oil! Olympic Games! Talking Pictures! Evangelical Fervor! And a child kidnapping gone very, very wrong. Based on characters created by author Erle Stanley Gardner, this drama series follows the origins of American fiction’s most legendary criminal defense lawyer, Perry Mason. When the case of the decade breaks down his door, Mason’s relentless pursuit of the truth reveals a fractured city and just maybe, a pathway to redemption for himself.