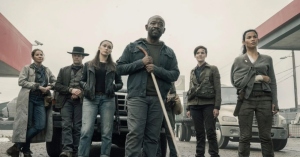 Why have one mega-successful zombie TV show when you can have two? AMC’s Fear the Walking Dead, a companion series to, naturally, The Walking Dead, comes from the imaginations of original comic book creator Robert Kirkman and Sons of Anarchy writer Dave Erickson. With a brilliant, inclusive ensemble cast and ironically sunswept Mexican vistas underscoring the visceral and psychological carnage, Fear the Walking Dead has, over its 5 seasons, carved out its own identity separate from (and to some folks, better than) its more well-known predecessor. Now, we’ve got a first look at season 6 below — and it looks like the stakes are getting even higher.

The end of season 5 involved a shocking death, and the hint of an interesting new future for season 6. Based on this first look, it seems like Morgan may still be with us, but he’s being hunted. The action is pretty intense as well. There’s a strong influence of There Will Be Blood with the visuals here, and it looks mighty impressive. As for the story, well, I must confess I haven’t watched this show since Season 1 and it appears they’ve essentially replaced the entire cast so… I’m at a bit of a loss. It’s got fans though, and if that’s you I’d be curious to hear what you think about this Comic-Con teaser trailer.

But first, check out the Fear the Walking Dead season 6 trailer below. The new season starts up on AMC October 11, 2020.