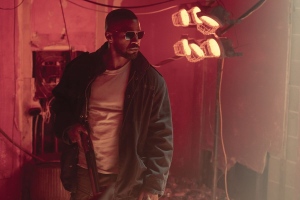 Marvel’s Blade had better watch his back, as Oscar winner Jamie Foxx has just signed on to play a vampire hunter in the Netflix movie Day Shift, Collider has learned.

The film will mark the directorial debut of JJ Perry, a well-known second unit director and stunt coordinator whose credits include Fast & Furious 9, The Fate of the Furious, Bloodshot and the John Wick franchise. As such, Day Shift will be a reunion of sorts, as Chad Stahelski will produce, and Shay Hatten had a hand in the script.

Foxx will play a hard-working, blue-collar dad who just wants to provide a good life for his quick-witted 8-year-old daughter, but his mundane San Fernando Valley pool cleaning job is a front for his real source of income — hunting and killing vampires.

The script was written by Tyler Tice, with current revisions by Hatten, who wrote the third and fourth John Wick movies as well as Zack Snyder‘s Army of the Dead, which will debut on Netflix next year. Stahelski and Jason Spitz will produce for 87Eleven Entertainment alongside Shaun Redick (Get Out) and Yvette Yates Redick (Malicious) of Impossible Dream Entertainment. Foxx and Datari Turner will serve as executive producers along with Peter Baxter.

It was the Redicks who discovered the screenplay when newcomer Tice won the top prize in the Slamdance Writing Competition and attached Perry to direct. They developed the project together before teaming with Stahelski and Netflix.

“Day Shift is a pulse-pounding thrill ride with action, danger and grounded comedy mixed with a deep mythology — the key ingredients for the absolute best time you can have watching a movie. We couldn’t be more excited about producing this at Netflix with Jamie Foxx starring,” Shaun Redick said in a statement.

“I’ve known and worked with JJ for a long time. His unique vision of Day Shift makes it such a great first directorial project for him,” added Stahelski.

The project extends Foxx’s relationship with Netflix, as he recently starred in Project Power, and will co-star in and produce the upcoming film They Cloned Tyrone, as well as the series Dad, Stop Embarrassing Me. Foxx next stars in the Pixar movie Soul, which will debut Christmas Day on Disney+.