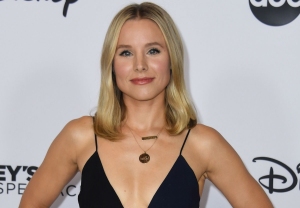 Kristen Bell has a history of genre-blending mystery solving in television. From Veronica Mars to The Good Place to, um, Veronica Mars again, Bell is just a joy to watch get thrown into earth-shattering mysteries while making darkly uncomfortable jokes along the way. It’s with this lens — and my general love of television comedy-thrillers and joy at the sub-genre continuing to flourish — that I am beyond excited for her new genre-blending mystery-comedy-thriller Netflix miniseries recently announced, per Deadline.

Bell will produce and star in The Woman in the House, an eight-episode Netflix miniseries that is not The Woman in the Window, but does feature a similar-ish plot (and, yes, title) that will be played for many more laughs. Bell plays Anna, a sad and lonely woman who sits near her window watching the world pass her by with a glass of wine. But when a handsome beefcake moves in across the street — and Bell just might witness him commit murder — everything about her life will change. The miniseries is created by Rachel Ramras, Hugh Davidson, and Larry Dorf, who most recently created Nobodies for TV Land, and will also showrun the series. It will be produced through Gloria Sanchez Productions, the female-centered wing of Will Ferrell‘s production company (Ferrell is also a producer), and other key creative members include Marti Noxon (Sharp Objects), Jessica Elbaum (Booksmart), and Brittney Segal (Search Party).

Despite its similar trappings to The Woman in the Window (and Search Party and A Simple Favor and The Flight Attendant and on and on), I am beyond excited for The Woman in the House. I love the decision to craft this as an eight-episode miniseries, I love Bell as a performer, I love Gloria Sanchez’s ongoing commitment to fostering interesting female-centered and driven content, and as mentioned before, I love the intersection between suspense thrillers and comedies. This show sounds like it’ll be beach fiction TV of the highest order, and I can’t wait for it to jostle my insides and become my next binge.

We’ll keep you updated on The Woman in the House as it develops.