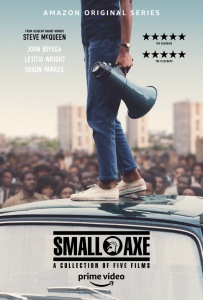 Amazon has released a new extended trailer for Steve McQueen‘s five-film anthology Small Axe, which will begin rolling out on Prime Video this month.

McQueen is the Oscar-winning filmmaker behind 12 Years a Slave, and he has spent the past couple years working on this passion project, which was commissioned by the BBC. Small Axe is comprised of five films set between the late ’60s and the mid ’80s that tell personal stories from London’s West Indian community.

The first film, Mangrove, will premiere on Friday, Nov. 20. Shaun Parkes stars as Frank Crichlow, the owner of a lively Caribbean restaurant that is subjected to raid after raid by the racist local police, prompting Frank and his community to take to the streets in peaceful protest in 1970. When Frank and eight other men and women are wrongly arrested and charged with incitement to riot, a highly publicized trial ensues, leading to a hard-fought win for those fighting against discrimination. Letitia Wright and Malachi Kirby co-star alongside Sam Spruell and Jack Lowden.

The second film, Lovers Rock, tells a fictional story of young love at a Blues party in 1980, and will debut on Friday, Nov. 27. Amarah-Jae St. Aubyn makes her screen debut opposite Blue Story star Micheal Ward.

The third film, Education, is a coming-of-age story about a young boy named Kingsley (Kenyah Sandy), who is sent to a school for those with “special needs.” Distracted by working two jobs, his parents (Sharlene Smith and Daniel Francis) are unaware of the unofficial segregation policy at play, preventing many Black children from receiving the education they deserve, until a group of West Indian women take matters into their own hands. Naomi Ackie co-stars in Education, which premieres on Friday, Dec. 4.

The fourth film, Alex Wheatle, tells the true story of an award-winning writer who grew up in a mostly white institutional care home and later found a sense of community for the first time in Brixton, where he was able to nurture his passion for music. Upon being thrown in prison during the Brixton Uprising of 1981, he’s forced to confront his past and embark on a path towards healing. Jonathan Jules and Robbie Gee star in this film, which will premiere on Friday, Dec. 11.

The fifth and final film, Red, White and Blue, stars John Boyega as Leroy Logan, a young forensic scientist with a yearning to do more than his solitary laboratory work. When he sees his father assaulted by two policemen, he finds himself driven to revisit a childhood ambition to become a police officer; an ambition borne from the naïve hope of wanting to change racist attitudes from within. Leroy must face the consequences of his father’s disapproval, and the blatant racism he finds in his new role as a despised yet exemplary constable in the Metropolitan Police Force. Red, White and Blue will close out the anthology on Friday, Dec. 18.

McQueen executive produced Small Axe with Tracey Scoffield and David Tanner, and multiple films in the anthology were accepted into both the Cannes Film Festival and the New York Film Festival. The anthology’s title is derived from the African proverb, “If you are the big tree, we are the small axe,” so watch the new trailer below.