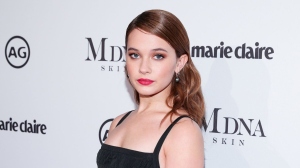 Disney+’s upcoming Willow series has begun to fill out its ranks. Deadline is reporting that Ellie Bamber, Cailee Spaeny and Erin Kellyman will serve as the female leads of the new show, which serves as a sequel of sorts to the 1988 Lucasfilm cult favorite. (Warwick Davis, who portrayed the titular character, will return.)

Apparently, this new story will take place in the preexisting fantasy realm established by the Ron Howard-directed feature, this time focusing on a team’s quest so save a kidnapped prince. According to the report, “The members of the team include Dove (Bamber), whose backstory resembles that of Willow from the movie. Dove is an unassuming kitchen maid who proves that she is the “chosen one” as she embarks on the journey. She is joined by Kit (Spaeny), the princess whose twin brother was abducted. She is destined to be a leader and ultimately the queen. Kellyman plays Jade, a servant who is Kit’s best friend and moral compass. She is on her way to becoming the best young warrior in the kingdom.” They are currently looking to cast another actor in a role that is similar to Val Kilmer’s role in the original, a rascally thief and warrior who will aid them in their quest.

This new cast is super exciting and makes perfect sense. Kellyman co-starred in Solo: A Star Wars Story, which was co-written by Jonathan Kasdan, who wrote the pilot for the Willow series and serves as co-showrunner alongside Wendy Mericle, Jon M. Chu (who will direct the pilot episode), Howard and original writer Bob Dolman. (She also has a role in the eternally delayed A24 fantasy The Green Knight and has an unconfirmed role in Marvel Studios’ The Falcon and the Winter Soldier Disney+ series). Spaeny is having a moment thanks to her role earlier this year in the deeply brilliant FX series Devs (where she played a male character – how did nobody talk about this show?) and as part of the ensemble for Blumhouse’s The Craft: Legacy. And Bamber has proven Disney credentials, having appeared in last year’s The Nutcracker and the Four Realms (she also had a role in the underrated Nocturnal Animals).

Not much else is known about the new Willow, besides it being the first non-Star Wars property Lucasfilm has worked on since 2015, which is very exciting. Also, if the level of craftsmanship and fun is anything like the other Lucasfilm live-action series on Disney+, The Mandalorian, we’re probably in for a very good time.